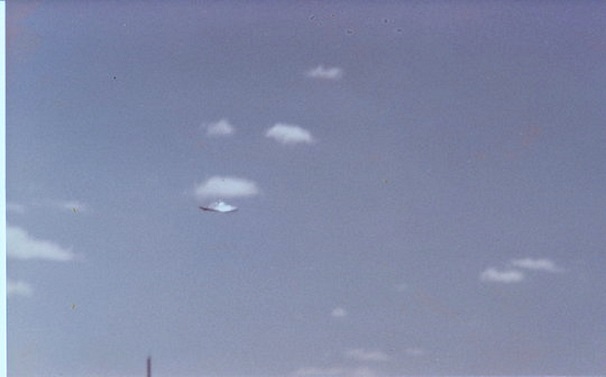 On Wednesday 19 April 1978, Mr. S. and his girlfriend were driving in the vicinity of Tainter Lake, when they decided to stop and attempt some fishing since most of the ice was already thawed.  They found a spot along the shore where they could do some casting. Mr. S. had also brought along an FM portable radio. They had been at this spot for about a half an hour when the radio began picking up interference. It was then that Mr. S. looked up into the sky, thinking an airplane must be going over-head.  At that point the object “appeared” out of the southwest, moving northeast. He and his girlfriend became very excited and frightened. Remembering that they had a camera with them, (an Instamatic) Mr. S. went and got it to take some pictures. He almost dropped it several times trying to get it out of the case. He finally got it out and started to point it at the object when the object suddenly veered off course in their direction and came towards them. They became even more frightened but Mr. S. was determined to get a photograph of the thing! 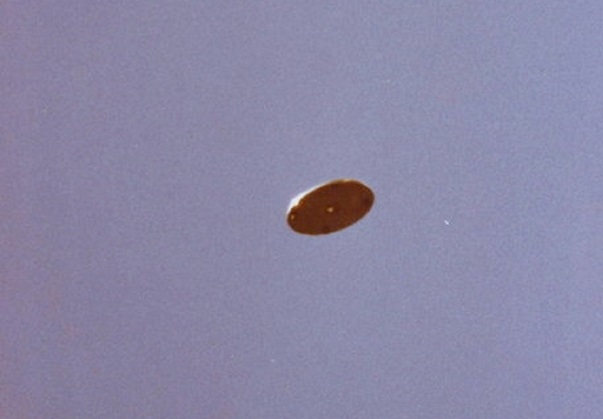 At that point, the object began to circle them at a high altitude as Mr. S. began taking pictures. The object flew around the area only once and then disappeared into the sunlight. The whole incident lasted about 3 or 4 minutes.  Mr. S. was hesitant about showing anyone the photos because he was afraid of people thinking the wrong thing. He finally sent a UFO lecturer a copy after attending one of his slide lectures on the UFO subject.  Mr. S. was unable to determine the size of the object for lack of reference, or how fast it was moving. He did say, however, that it gave off a “crackling sound” as it passed around them.    Mr. S. turns his camera sideways to get this shot of the object as it passes almost directly overhead. At this point Mr. S. experienced a sensation of “heat” as well as “prickling sensation” around and “in” his head and eyes, however Mr. S. stated that he experienced no permanent or temporary after-effects except a bad case of the “jitters”. This shot was taken while Mr. S. was in a crouched position and remembers falling over on his back afterwards. He said he noticed an “amber or orange-red light” underneath in addition to several small lights which would blink on and off erratically for different lengths of time. (See Photograph) He also noticed 4 “pods” or “landing gear”. The bottom appeared to be a “dull” black. The shock of falling backwards prevented him from taking any more pictures of the object as it continued overhead.  SPECIAL NOTE:   The following UFO photos are from the archives of Lt. Col. Wendelle C. Stevens, and the accompanying details have been reproduced as close to the original sighting report as possible.

AND READ THE FACTS AT OPEN MINDS TV