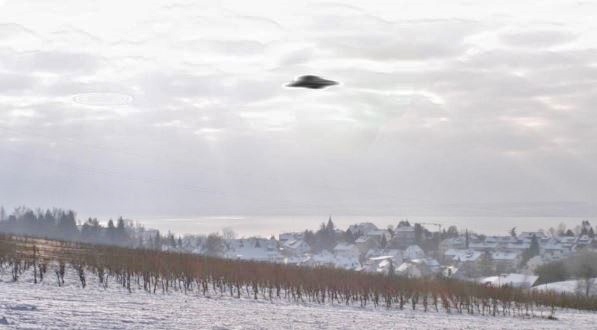 Yesterday night my sister and I were driving home from a shopping trip. It was about 10 pm and we were maybe a mile away from the house. She spotted the object first.  I was forced on the road since we were in the country and animals are everywhere. At first I didn’t believe her and kept driving.  But we got super close to it and I stopped the car and shut the lights off. You could see that the object was shaped like a typical saucer and from the lights on the outer rim you could tell it was rotating around.  It stayed in that spot for over a minute then the light went off and we couldn’t see it again. We raced home scared.  Neither of us had pictures or videos of the thing. We tried to take pictures, but when we got home to show our dad the pictures they were no longer on our phone. We were standing outside when we were telling my dad about this thing.  Then my boyfriend pointed out to the field across the street and there was the thing again. It did the same things it did when we saw it the first time.  It rotated around with lights on, then the lights disappeared and we couldn’t see it again.  About 15 minutes later, we all saw this orb-looking thing shoot through the field left to right super-fast. It looked like if someone would have a flashlight and run from left to right.  But this moved faster than I’ve seen any human running. My boyfriend and dad went walking over to the field to see if they could see anything and the orb went back to the left side of the field then straight up.  After that we didn’t see anything again.  NOTE: The above real photo is from Meersburg Germany.