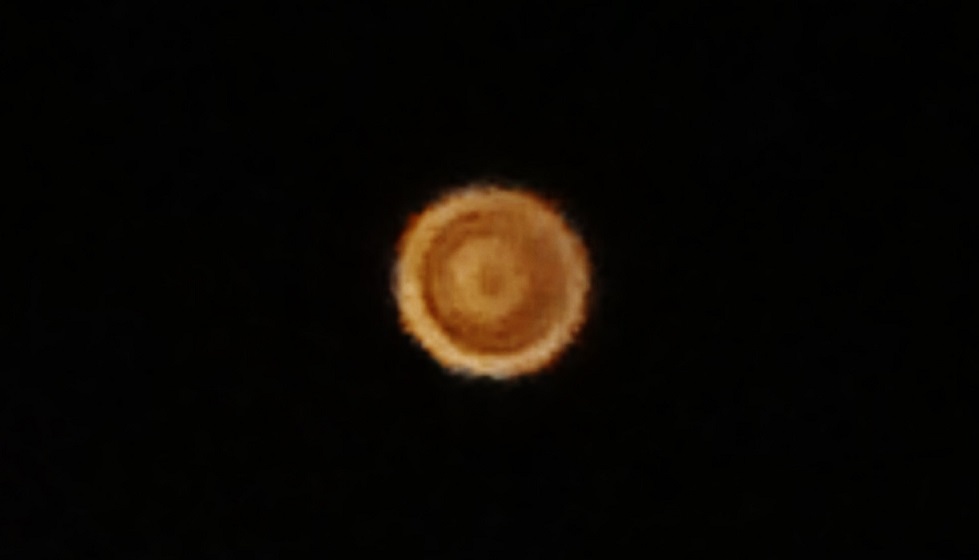 I took my dog out just prior to going to bed at 10:45pm as I do every night. We live on the third floor of an apartment building in Irvine California. I happened to see a bright whitish orange-yellow light ascending up over the trees in the southeast sky which seemed to come toward me like a plane’s head light (which is what I assumed it was), but then it just stopped and hovered where it was at. It seemed as if we’re possibly 3-5 miles away, maybe less. I watched for a moment or two and then hurried to put my dog inside while I grabbed my iPhone and headed back out and snapped several pictures.

I then stood on the front walkway on the third floor of my building looking southeast and just watched it sit there for another 10 minutes hovering. During the time that the light was present, several helicopters were in the sky heading towards it. One of the helicopters had a search light, but the light was swirling around skyward instead of toward the ground as they do when conducting a typical search. I watched in amazement thinking there had to be a logical explanation and that it would eventually end up being a common object that I would be able to recognize, but it remained stationary. Then it was as if someone just turned out the light. It seemed as if it was still there after the light went out. Upon examining my pictures, I noticed the light seemed to have a distinctive circular shape with almost a separate round spot in the center that stayed consistent in each picture whether it was a zoom shot or a regular one. Today, I google to see if anyone else had reported anything similar and a gentleman from Temecula,CA videotaped the very same thing last night as well. Temecula is to the southeast of where I am.

20 thoughts on “EXCELLENT PHOTO OF A UFO OVER IRVINE CALIFORNIA”