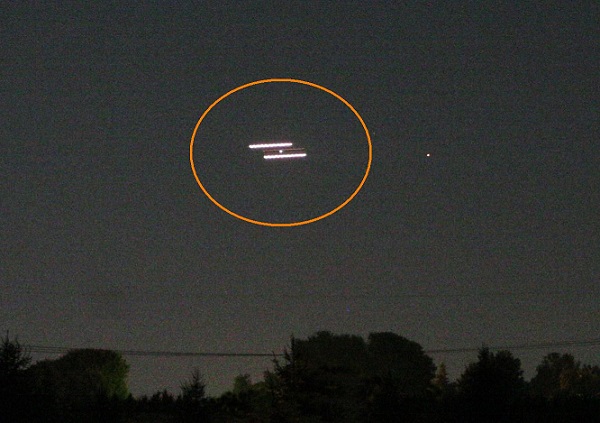 My husband and I were in the backyard beside our firepit relaxing. I noticed bright red lights moving in the sky first, watched them move right to left about a mile away above the trees, mostly red with a yellow blinking – irregular beat. It then moved closer and I realized I was seeing something weird. I told my husband to turn around because I was looking at something very odd. It was hovering at that point, then moved towards us, closest it got to us – maybe 0.25 miles away. We watched for half a min before we agreed this was very weird. He got out his phone and started filming. Unfortunately the night-time contrast on phone filming stinks so there is no differentiation of treeline and sky, and lights are blurred together.  At this time I could make out the object pretty well: cylinder shaped with a triangle top, lights were now separated into four horizontal and parallel rows of bright dots/bulbs. All were a bright red, with the bottom two rows adding green and yellow irregularly. We were very quiet and I swore I could hear it. It sounded like a quiet wind machine, maybe a slight buzzing. Not as loud as a helicopter. This lasted approx. 10-15 sec. Then it moved back so quickly, but smoothly, approx. 1 mile back, began hovering again and the lighting changed to a red X with a greenish irregular blinking light in the middle. Occasionally more red lights in a thin line lit up on the right side of the X. I could not hear it anymore. This lasted approx. 10 sec. Then it moved further away and we were now only able to make out that it was a red light with a greenish light irregularly blinking. It moved right to left twice (maybe 5+ miles), up and down once, hovering short times in-between all quickly, but so smooth.  It was clear it was much further away at this point and as it was still moving right and down it went behind the tree-line. We both could not believe what we just saw. We started talking and thinking about what it legitimately could have been… possibly the military base 30 miles away testing new aircraft, patrol over the highway nearby, the County Fair 10 miles away providing interesting entertainment, or someone playing with a homemade drone to create hoaxes. Then about five minutes after the first sighting it came back. It was further away, so we could not define shape and lighting lines, only color and movement. It flew in a similar way as before, right to left then up and down… quickly and smoothly. Then it was gone behind the trees less than a minute later. All we could say at this point was “that was crazy” and just kept staring at the sky waiting for it to reappear. We went inside after waiting about an hour for a re-sighting. It just didn’t feel real, but we both confirmed exactly the same thing. I have really good eyes and my husband just got new glasses pretty much perfecting his vision. Just crazy. Please debunk this sighting for me. Tell me there is another reason for this unidentified flying object in the sky. We know what planes and helicopters look and sound like. There were plenty of them in the sky that night, but this was definitely not one of them (the lights were too bright, the shape was different, the movement was different… it was nothing we had ever seen before). Was there anyone else in our area that claimed a similar sighting last night?  NOTE: The above image is real and from 9-24-07 Alloway Township New Jersey.