On February 4, 1968, from approximately 7:20 to 7:25 P.M., about two hundred residents of Redlands, California, either saw or heard what was apparently the same huge, low-flying, disk-shaped object as it passed overhead. A minister conducting services in a church in Redlands was recording his sermon at the time and obtained a recording of the sound, which many people present described as a high-pitched, modulated whining sound much like that of the “FLYING SAUCER” seen on TV program.  The object apparently came down just west of Columbia Street and north of Colton Avenue, then proceeded slowly in a northwestern direction for about a mile or less, at an altitude of about 300 feet. Coming to a stop, it hovered briefly, jerked forward, hovered again, then shot straight up with a burst of speed. (Total time of the sighting must have been less than five minutes).  The object’s size and altitude were estimated by Dr. Sanderson. The object seemed (if at 300 feet altitude) to be around 50 feet in diameter. 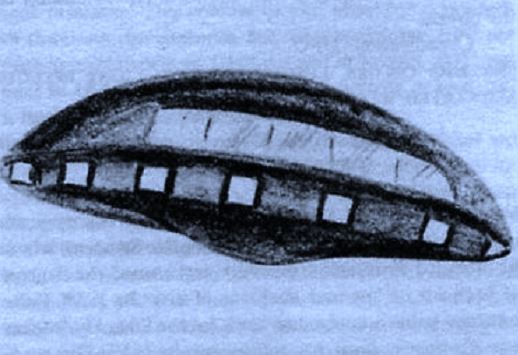 The artist’s conception was based on a series of interviews with witnesses by Professor Brownfield. His composite painting was verified by witnesses. The lights on the base appeared to expel jets of bright orange flame and were seven in number. The light on the top (eight to ten in a row) were alternating in color (red and green), giving the impression that the object was rotating.  The object was not detected in RADAR, by the nearby Norton air Force Base, but a USAF spokesman admitted that their radar was not the type that would have spotted it anyway. The closest radar that might have detected the object was a March Air Force Base near Riverside, but a range of mountains stands between Redlands and the location of the base.  Professor Philip Seff, who headed the investigative team, reached the following conclusions:    The object sighted can be attributed to no known type of aircraft. Since the atmosphere was clear and the object was low, witnesses obtained a clear view; also, no known aircraft was over Redlands at that time.  As far as is known, the object cannot be attributed to any known natural phenomenon.  NOTE: The above image is a rendering.