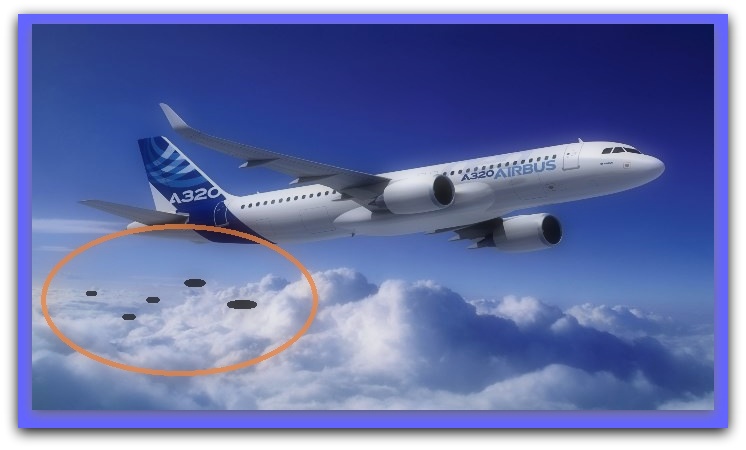 At approximately 8:30 am, Dec 12, 2015, I was outside my home, waiting for a co-worker to pick me up for work. It was a very mild & breezy morning & the sky was mostly clear except for some clouds here and there.  As I’m usually want to do when outside, I enjoy the nice sky. This morning I noticed an airliner very high up, at a guess anywhere between 10-20,000 feet traveling in a roughly east-westerly direction.  As I watched it, a glint of light far behind it caught my eye. I suddenly saw 5 gleaming spherical objects trailing the airliner going the same direction at approximately 1-1+1/2 miles.  The objects were keeping pace with the airliner & were in a “diamond” type formation with the closest object behind the airliner being the “bottom tip” of the diamond & the other four, one each, at the “points” of the diamond.   All objects traveled in the exact same direction & were equidistantly spread apart one from another, perhaps hundreds of feet. At no time during the brief sighting did they speed up, slow down, change direction, move away from their positions or “phase” out of view.   I immediately ruled out the possibility of high flying birds as all the objects were visibly flying, at some points, ABOVE the highest cloud layer, which the airliner was also doing.   If they were birds at that height (which as a far as I know, birds don’t fly that high) they would’ve been far too small to see with the naked eye & certainly would not reflect a metallic gleam as these objects did.   Also, being that far above a cloud layer that high, as I saw their shape, they would’ve been FAR too large to be birds. If I had to guess at their size at that distance in order to be seen from the ground the way I did, they would’ve had to have been at least a hundred feet in diameter apiece.   As mentioned, the sighting was very brief, merely a minute and a half or so. I was anxiously awaiting my co-workers arrival to help me verify my sighting but sadly, he arrived literally a few seconds after they & the airliner they were tailing, all disappeared into the distance.   If anyone has seen these objects at nearly the same time I did, I would very much like the corroboration. I’ve only ever seen a few “unexplainable” airborne objects in my lifetime but this was by far the most exciting!