A reported sighting of a UFO with occupants seen through its windows, having a number of similarities to both the Squyres and the Knight cases, occurred in Connecticut, five years later, on December 16, 1957.

It was investigated by Richard Hall, former Assistant Director of NICAP and currently NICAP’s Research Consultant, and Isabel Davis, currently of the NICAP staff.

Mrs. Mary M. Starr, a resident of Old Saybrook and a former teacher with a Master’s Degree from Yale, told the NICAP investigators that she had been alone in her home on the night of December 15.

“I went to bed early,” she said, “about 10:00 o’clock. Some time between two and three in the morning, I was awakened by a bright light in my room. I looked out the window and there was what I first thought was a crippled airplane in my back garden.

But when I got my eyes really open, I saw that it was a cigar-shaped object, brightly lit and with square portholes, hovering just above my clothesline. I could see men inside. . .”

The object, no more than ten feet from the north side of Mrs. Starr’s home, was approximately 20 to 30 feet long and dark grey or black in color.

It hovered motionless about five feet above the ground, between the house and the tool shed. She saw no wings, fins, or other appendages. Through its lighted windows Mrs. Starr saw two figures that passed each other, walking in opposite directions. 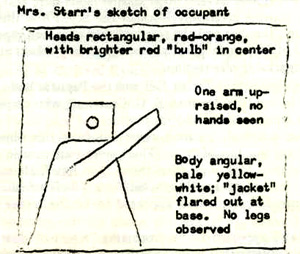 I could see that it [the object] was so shallow that the men could not have been more than three and a half or four feet tall,” she told the investigators.

The occupants’ right arms were raised but no hands were visible. They wore a kind of jacket that “flared out” at the base, and their heads were unusual – square or rectangular, red-orange in color, and with a brighter red “bulb” in the center.

She thought they might possibly be wearing some kind of helmets. The lower portions of their bodies were below Mrs. Starr’s sightlines. She saw nothing else in the object, such as chairs or instruments.

A third being came into view from the left. As Mrs. Starr leaned forward to see more clearly, the portholes faded and the entire shell of the object began glowing brightly (compare with Mrs. Knight’s report). From the top end closest to the witness there arose a kind of six-inch “antenna” that oscillated and sparkled.

After five minutes of glowing steadily, the antenna was retracted and the craft began to move. It retraced its original path, gliding smoothly in the direction from which it had apparently arrived. It then made a very sharp right-angle turn, appearing oval in shape.

The hull had turned a dull grayish-blue and small, circular lights now outlined the entire rim. The UFO dipped and undulated, following the contours of a small depression to the north of the witness’ house, then tilted sharply and shot up into the sky at terrific speed, in total silence.

Since most of the other houses in her neighborhood were unoccupied at that time of year, Mrs. Starr was the sole witness to this strange appearance, although there had been previous reports during the preceding weeks of objects sighted in the area.

Because of her background, and because she had no conceivable reason to invent or embellish such a story, neither Miss Davis nor Mr. Hall could find any reason to dismiss her report out of hand. NOTE: The above image is CGI.