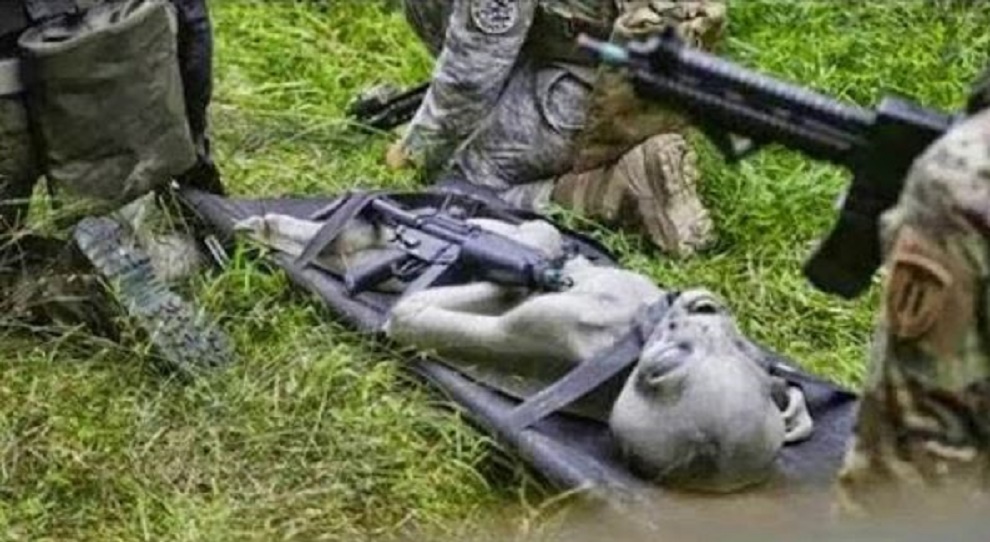 ALIEN SHOT AT McGUIRE AIR FORCE BASE
.
JANUARY 18, 1978    ………….  McGUIRE AIR FORCE BASE NEW JERSEY
.
During the early morning hours of January 18, 1978, UFOs were sighted flying over Fort Dix and McGuire AFB, adjacent military bases. Shortly afterward, an Air Force security patrol was ordered to the back gate of McGuire AFB to allow entry to New Jersey State Police who were searching for something.  One of the airmen on duty was Sgt. Jeff Morse. The state trooper told Morse that a Fort Dix MP was pursuing a low-flying object that had hovered over his car; then a small being with large head and slender body appeared in front of his car. The MP had panicked and shot the alien several times with a .45 automatic. The being had fled over the fence between the two bases, before falling and dying on the deserted runway.  Morse and his colleagues found the body lying on the runway. As they followed routine procedure and roped off the area of the “crime scene,” other “blue beret” forces unfamiliar to Morse and his companion took over. Morse was relegated to a back-up role, but could see from a slight distance what was happening.   Later that day a team from Wright-Patterson AFB arrived in a C-141 cargo aircraft, crated up the body, loaded it on board, and took off. Morse and his companion were warned not to talk about the incident or they would be court-marshalled.  Two days later Morse and other participants were taken to Wright- Patterson AFB, OH, where they underwent intimidating interrogation and were again warned not to talk about the incident. (Morse supplied the names of the interrogation team taken from their name badges, and their identities have been verified.) Morse reported; “[They] told me about my duty to keep my mouth shut. . . I signed a form and it is supposed to bind me for life.”  Shortly after returning to McGuire AFB, Morse was debriefed by his commanding officer, a lieutenant colonel (name also known), and heard no more about the incident. Shortly thereafter each of the airmen who had been involved was transferred to a separate overseas base. Morse was shipped to Okinawa
.

The author has met with Morse face-to-face several times, talked with him on the telephone numerous times, and considers him completely credible. He has cooperated fully, answering all questions to the best of his ability and agreeing to meet and talk with various colleagues.  He has given a formal deposition on the incident in the presence of several witnesses, and was subjected to questioning on specific details.  As a direct consequence of innocently being in the wrong place at the wrong time, Morse has been harassed and threatened, and his reputation defamed to the point that he had difficulty finding employment in the law enforcement field.  Another witness of this extraordinary event was George Filer (Major, USA, Ret.), who was stationed at McGuire AFB in 1978. Serving as an intelligence officer; one of his duties was to brief the commanding general.  He was not on duty at the time of the incident, but the next morning he heard talk about the “alien body” and saw a lot of unusual activity He is prepared to testify on what he knows firsthand and what he has learned since about the incident.