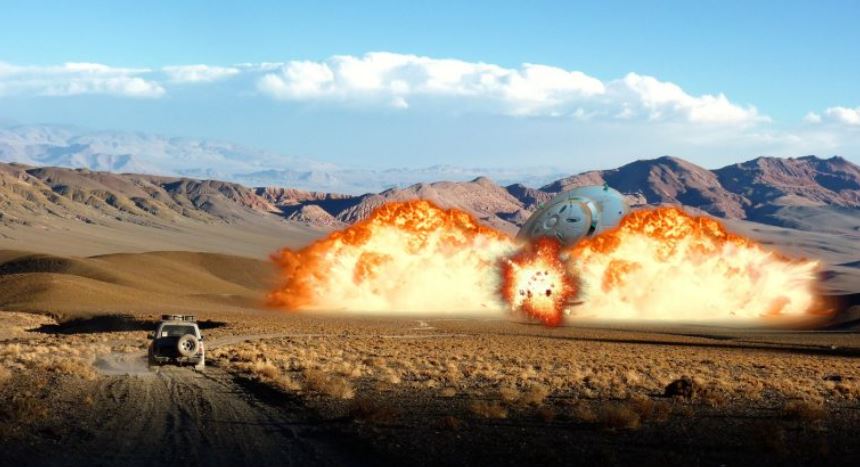 While having lunch at around 1:45 pm on the sunny afternoon of 17th August 1995, Tony Galvano would witness “a sort of flying saucer” of a “bright metallic color” come screaming out of the brilliant blue skies over the Serrania Colorado region of Joaquin V. Gonzalez. As the object passed over the small community, many of whom were now also watching, it was followed by “two other objects – probably missiles” which would impact against it.  The craft then suddenly “began to fail” and fell to the ground shortly after. A second or so later, a “powerful explosion” filled the air followed by “intense seismic movement”. According to the witness, the aftershock of this seismic activity would be felt almost 200 miles away. Indeed reports would suggest residents in towns as far away as Gaona, El Quebrachal, and El Galpon would notice the sudden rumbling activity.  Something  just  short  of  panic  soon  swept  through  the  small  communities.  Then, shocked residents of the area would witness “a column of thick, black smoke” rising into the cloudless sky. Galvano would later state that he’d “never seen anything like it” and that it was most definitely a solid craft. While many of the residents would run towards the scene in order to get a better look, Galvano would run towards the nearby airstrip. He would jump into his Flystar airplane, taking off and into the air shortly after and “went to investigate”.  However, due to the thick, dense smoke, he couldn’t locate the downed craft. After several rounds of the area – all through the hazardous smoke – he returned to the airstrip. Staying up any further would be dangerous flying. And besides, Galvano wished to see what might be happening on the ground. It turned out, in discussion terms at least, there was plenty.

Crash Site On The Esplanade?

According to Galvano, local radio broadcasts would relay account after account from local residents who had witnessed the mysterious object. Apparently intentionally brought down to the ground. All expressed the same confusion at just what the object was, as well as a demand from the authorities for answers and assurance. Galvano would organize a search of the area with other concerned residents. However, despite covering “large expanses of terrain” they could not locate anything resembling what had crashed out of the sky earlier that afternoon.  Two days later, though, Galvano would take to the skies again. This time, his journey would be much more fruitful than that on the day of the crash. Below him was an esplanade with what appeared to be an “impact print” around three miles long and 600 meters across. It was obvious to Galvano that the area had undergone some form of intense “friction heat” by a “giant, heavy object”.
As he brought the plane down a little lower, he could clearly see the trees that had previously resided within the impact area tossed to one side or another, completely ripped and torn from the ground. Even stranger they had bizarre markings “as if they had been sprayed with acid”.

He would state later this he had “never seen anything like” the “strange dust” he now held in his hand. Specialists at the University of La Plata would conduct analysis. Results would indicate that it contained 98% potassium with “the remaining 2% unknown material”. According to the results, this substance-level is not found anywhere on Earth. Despite these results, further searches of the area wouldn’t yield any further interesting finds.  NOTE: The above image is CGI.

THANKS TO https://www.ufoinsight.com and Marcus Lowth.