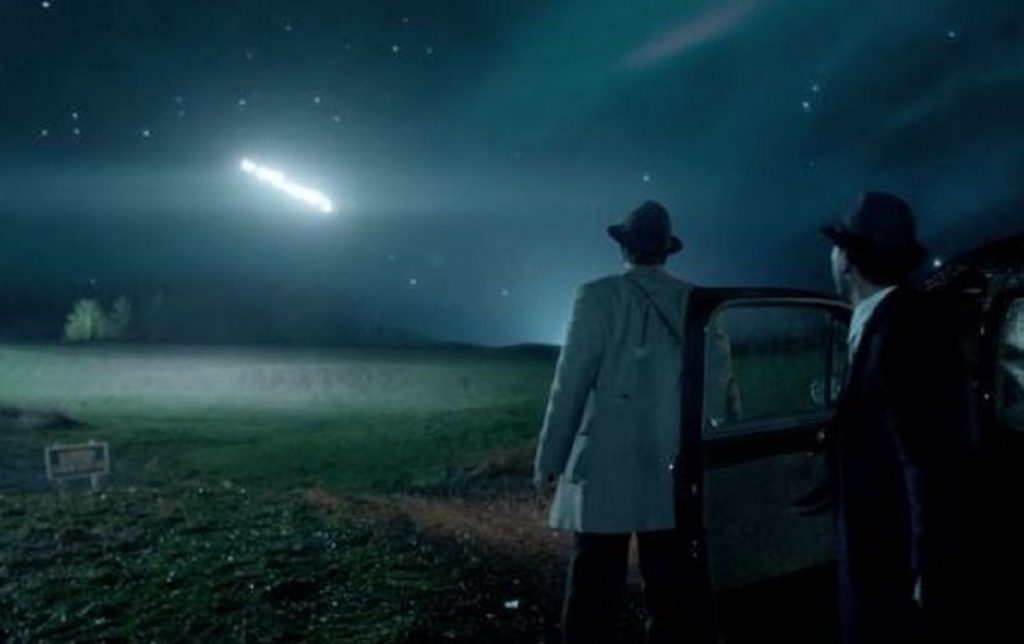 A California witness at Lake Silverwood recalled a UFO incident from 1983 when a boomeranged-shaped object passed overhead, according to testimony in Case 95355 from the Mutual UFO Network (MUFON) witness reporting database.

“Me and two friends were going catfish fishing at Lake Silverwood,” the witness stated.  “We were off road going to the south side of the lake and entered by the north side by the dam. We were on a switch back and as we came around a curve our view was northeast looking out over the valley and saw a bright white light way out in the distance many miles away.”  The witness later Googled the location and discovered “it was coming from” Area 51.  “When we came around the next curve on the switch back it was just about on top of us.  My buddy yelled stop and turn off your engine. My cousin had a UFO burn out his electrical system on his car. I did and turned off my lights too. We jump out of my 4×4 and the three of us stood in front of my truck and were all looking at this thing as it came towards us.”

The witness described the object.
“We noticed that the light was on the bottom of the object and it was huge. The front of it looked like wraparound sunglasses. We were able to see into it and counted that it was four decks thick. We were all talking to each other what we were seeing. We could see columns from deck to deck. On the most upper deck we could see humanoid figures moving about. We were like saying things like look at the guy looking out. Is he driving it or what? It looks as if someone was shining a light up at it like the one that was seen in China.”  As the object continued to pass directly the group, it blacked out a good portion of the sky.  “Everything around us seemed to be crackling. I could feel my insides humming. Thinking of it now I’m glad I turned off my truck. As we were looking at the back of the craft there were four boxes that were louvered and shimmered like a road on a hot summer day. The boxes looked like a TV when there’s no channels on, black and gray from top to bottom of the craft. I had heard of small flying wings being seen on the Hudson in New York around the same time. This came to me later on in life. Four decks thick. Four boxes. Sixteen smaller craft would fit in this no problem. I worked in aircraft after this and was in the world’s largest building by volume in Everett, Washington. It wouldn’t fit in there. The ceiling would collapse with all the structure having to be removed to fit it. That’s how large this craft was. Also, later on in life, the Phoenix Lights happened. Yep, now we’re getting there, but what we saw was larger. I’m telling this story now and can still see it in my mind’s eye. It changed my life in many ways – even what I went to as a career, aircraft structures final assembly. Did the B-1-B bomber and all three aircraft that was built at the Everett facility. The direction I figured it was going was towards Norton Air Force Base.”  NOTE: The above image is CGI.

THANKS TO HTTP://WWW.MUFON.COM JOURNAL