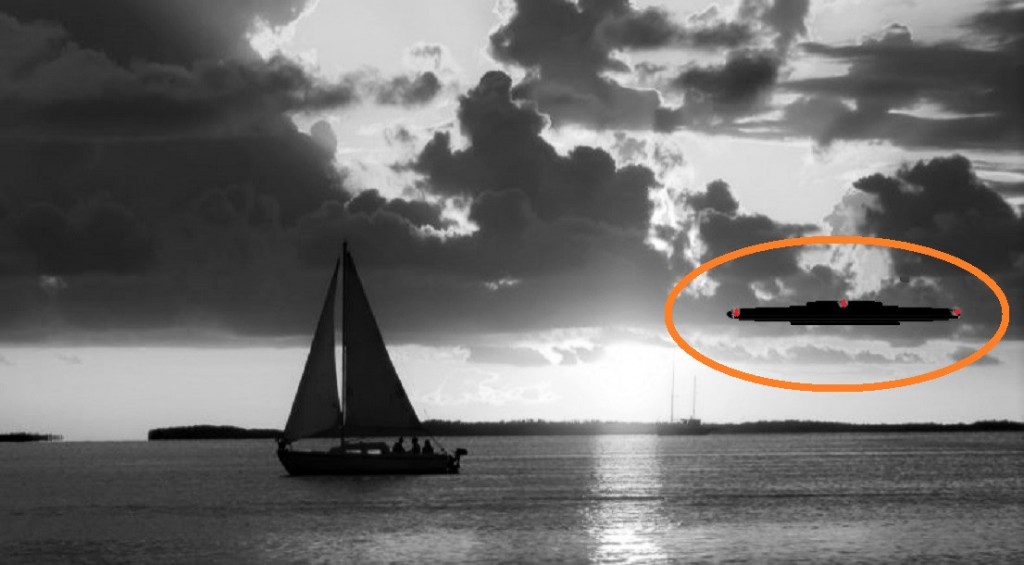 ALIEN CRAFT ENCOUNTER OVER MATAZAS BAY
.
JULY 5, 1959  ……….. MATAZAS BAY CUBA
.
It was the morning of the 5th of July of 1959. At 9:30 a troop of Boy Scouts who had set out from the Versailles district, walked along the nearby coastline. There were a total of more than 30 people clustered to one edge of the shore, while their guides were relatively nearby. The troop’s exact position was nearly facing L’Amours Beach. It was a clear, sunny, and virtually cloudless morning. Unexpectedly, shouts came from the troop leaders. “Look at that!” The formation broke up and all ran toward the beach. In awe, the witnessed an object which according to the first ones to see it, had emerged from the sea and hovered scant meters over its surface.   The object was oval in shaped, although some said it resembled a spinning top, while others stated it was a disk, given its resemblance to what was commonly known as “flying saucers”. Seconds later, the bright disk levelled off, parallel to the water. It immediately rose skyward vertically at prodigious speed, vanishing into infinity in less than fifteen seconds.   According to Eyewitness accounts, the machine appeared to be metallic, with a silvery color. Everyone could see that at the critical moment, a boat with two fishermen sailed rather close to the object. The fishermen looked upon the scene in astonishment. The object was wingless and measured between 6 and 8 in diameter. As was  subsequently determined, the craft rose from a depth calculated at 15 meters without making any noise or leaving a wake. All this happened barely 200 meters from the shore.   The party furnishing the details on this fascinating account solemnly swore having witnessed the event. In fact, Leonel Rodríguez retold is unforgettable experience eloquently – another one to be added to the annals of the worldwide UFO phenomenon.
.
What the Matanzas Press Had to Say
.
Headlines for the 6 July 1969 issue of the “Adelante” newspaper proclaimed: “Strange Object in Matanzas Bay”. Highlighting the sighting in one of its columns, the paper said: “Despite the investigations performed, its exact nature remains unknown. There is speculation, of course, as to whether it was a flying saucer or one another the objects known to fly in space.”   The “El Republicano” evening paper set the matter on record with the following headline: “Strange Silver Object Seen in Our Bay.” It was later known that the “El Imparcial” newspaper also picked up the controversial story.  NOTE: The above image is CGI.
.
KEN PFEIFER WORLD UFO PHOTOS AND NEWS
WWW.WORLDUFOPHOTOSANDNEWS.ORG
WWW.WORLDUFOPHOTOS.ORG
THANKS TO http://inexplicata.blogspot.com
.