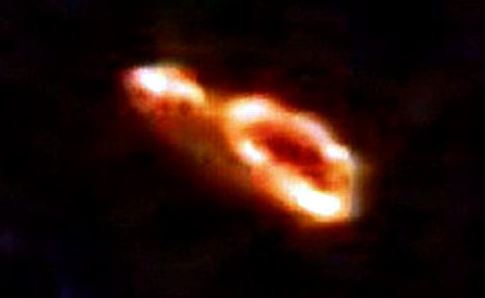 PHOTO EVIDENCE OF AN ALIEN CRAFT OVER ST ALBANS
.
AUGUST 29, 2010   …………  ST ALBANS UNITED KINGDOM
.
Herts Advertiser news desk revealed last week that a man in London Colney had seen some peculiar lights in the sky above St Albans at around 10.15pm on Sunday, August 29.  He saw more than 10 of the objects over a short space of time and did not believe they were Chinese lanterns – which can often explain such UFO sightings – as they were travelling very fast and in a straight line.  Rob Stichbury, who lives in the Roundwood Park area of Harpenden, saw something similar at around the same time that night. He said: “The bright object was travelling extremely fast coming from the St Albans/Redbourn area. It seemed to be following the path of the Nicky Line and took less than 15 seconds to cover the horizon.  “I only saw one and didn’t have time to get to the camera. Being a clear night it was instantly visible but certainly not a commercial plane as it was too large, bright and moving quite low and much faster than any other traffic. It disappeared in the direction of Luton Airport. Very strange indeed!”  Ken Collins, of Salisbury Avenue, also reports seeing something strange in the sky travelling faster than the speed of aircraft heading towards Clarence Park that night.  Liz Gurgur, who lives in the Marshalswick area, said she saw exactly the same thing as the London Colney man earlier this summer as she was driving home one night. She said: “I thought it was unusual as they were all in a straight line, spaced apart equally and high up. I was amazed, especially since I was once watching this programme which said there was going to be a lot more UFO sightings and I laughed at it.  “I’ve seen meteors before but this was different. If you imagine Christmas lights stringed up in a very straight line spaced equally apart, that’s what it looked like. But they were going quite fast at a constant speed, faster than a lantern or a kite. I’m sure there is a logical explanation for it but I don’t know what.”

Red lights  Gill Welsman from Southdown, Harpenden, has reported another UFO sighting in mid-August. As she was driving past Harpenden Common, she said she became aware of red lights in the sky and when she arrived home she got out her binoculars to examine the lights further.  She said: “I thought of hot air balloons but they were moving quicker. They were not as fast as a plane but travelling at helicopter speed. They weren’t as high as a plane, but well above the houses.  “When I got home I was interested enough to go out and have a look and could still see them going across the sky. I got out my binoculars – they weren’t hot air balloons, but all I can say is they were like translucent oval shapes filled with quite a bright orange or red light. I must have seen at least 10 to 12 of them.”  Another person from Bernard’s Heath, who asked to remain anonymous, saw a similar occurrence on Saturday, September 4, at around midnight.  The man reported hearing a faint thump and when he looked out the window to see where the noise had come from, he noticed what looked like a bright yellow/orange flame in the sky which moved at constant speed in the direction of Hemel Hempstead. More than 10 such lights followed, some travelling individually and others in small clusters.  The man, who said he often looked at the sky before going to bed, said: “I have seen many things in the night sky but never anything like this.”  Linda Lusby of Pondfield Crescent, St Albans, believes she may have a possible explanation for the string of recent sightings.  Along with her neighbours, she has been tracking the movements of the International Space Station and the times of her sightings correlate with what the London Colney resident described in last week’s paper.  She said there had recently been a sighting practically every night for between one and four minutes over St Albans and that it was sometimes seen on more than one occasion.   Mrs Lusby, who saw shooting stars at the same time one night, said: “It just suddenly appears very bright and moving across the sky, much bigger than any other star.”