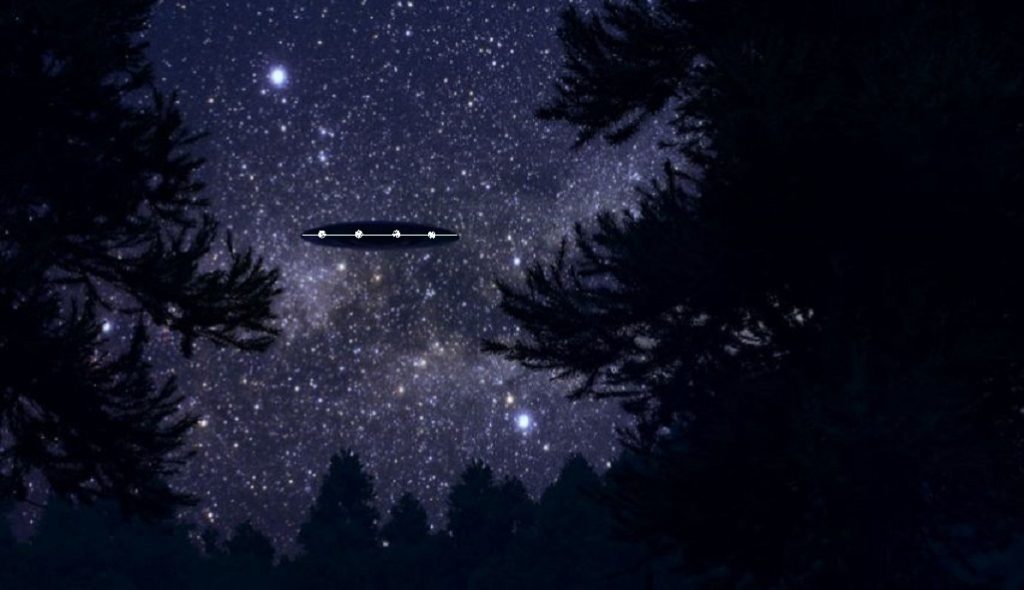 The night of New Years Eve 12/31/79, at about 9 PM, I was walking in a suburb of Pittsburgh to a party. I tend to look up at the sky a lot when I walk. The sky in Pittsburgh during that era, and possibly today, has a lot of haze and overcast, so there is an orange background to the night sky from reflections of the sodium vapor streetlights off of the clouds and haze. I looked up at the sky and observed a black cigar shaped object silhouetted against the orange background.  The object was at about a 45 degree angle from the ground in the south or southeast direction. Based on the fact that it was below the overcast layer, I’m estimating that it was at an altitude of 3,000 to 10,000 feet. I also think that it was about the size of a commercial airplane, or maybe if it was higher up, as large as a zeppelin. The object was silent and stationery. I remember the black object as having three lit portholes, evenly spaced. The portholes were definitely not stars. They were definitely larger than a star or a planet, and shined white without variation. There was only one object and it was pitch black against the orange overcast. I stared at the object for about five seconds to 10 seconds. I had enough time to stare, and realized that it was unnatural, debate whether to wave my arms at it, when it suddenly disappeared. It did not move at all before disappearing.  Since the object was silent, stationery, and disappeared abruptly, I’ve speculated that maybe it really never flew off, but instead was “uncloaked” just long enough for me to see it.  I’m an aerospace engineer who has spent his career working on satellites. I was a little disappointed in that the object did not look or behave like I would have imagined for a flying saucer. The incident was also so undramatic that I’ve only mentioned it to one or two people. There is no need for someone to contact me, but I would be OK if an investigator wanted to call me to discuss the incident.  NOTE: The above image is CGI.