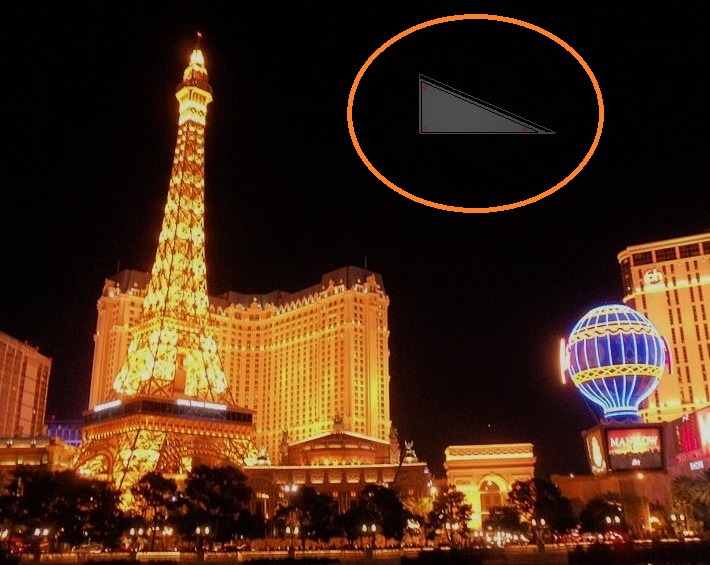 POLICEMAN SPOTS ALIEN TRIANGE OVER THE CASINOS
.
JANUARY 5, 2016  ……  LAS VEGAS NEVADA
.
While driving on 95S, i saw a triangle with an inverted bottom, outlined in chasing white lights hovering/bobbing above Santa Fe casino.  I live in the Centennial Hills area of Las Vegas, NV. This is the northwest. I was traveling to work southbound on the 95 freeway. I was late for work. I always watch the skies. I don’t know why, it’s not like I ever see anything. On 1/5/2016 between the hours of 9:25pm and 9:45pm, I actually did. As I passed the Santa Fe Casino, on my left, right above the casino I witnessed a triangular V-shaped object over the casino. I cannot remember if it was over the parking garage area or closer to the casino part. I am not sure. What I am sure of, however, is that I was seeing a V-shaped aerial object.  The object that I saw was “hovering” in the air, as low as a helicopter could fly. (I have had airplanes fly by or helicopters sit idle near me and I hear a sound) This object was  emitting absolutely NO sound. It was close enough for me to hear a sound. I would have heard a sound. Were this a helicopter or an airplane, I’m sure I would have heard sound. I thought maybe it was some type of military stealth flying object. But why would it be just hovering Non-stealthily over the nasty old Santa Fe Casino? Also I saw lights. I cannot say for sure what other colors I saw besides white. White was the dominant color, I do know that for sure. There could have been other colors as well. What I can say for absolute assurity is that the lights were chasing. Chasing like those Christmas lights that people have.
.
The lights were chasing in the shape of the object that I was seeing, which was a V shape (acute triangle) two long sides with a shorter bottom. The bottom was invert! ed to another v.   As I was seeing this, my psyche attempted to explain away my optical. The reason I was unsuccessful at explaining this away, was because of the motion of the object. As it hovered in that spot, it rotated at a half circle as it bobbed up and down slightly, while slightly tilted to the right. The movement of the craft, the location of the craft and the fact that I could hear no sound from a craft that was in such close proximity to my vehicle are the reasons why I am writing this report. The behavior of the craft frightened me more than the sight of it. I felt an immediate fear mixed with excitement mixed with dread mixed with sadness. A combination of feelings that I have never felt.  Please be advised that I was driving when I witnessed this. I pulled to the carpool lane and started to drive very slowly to ensure that I was seeing what I was seeing. I started to swerve cause I was looking at the object instead of looking at the road. I turned away to keep from getting pulled over for a traffic violation. I was afraid to stop and pull over.  This happened to me. I do not have any history of mental illness. I have never made a report of something like this before. I believe in the existence of something other than human beings for several reasons that I will not go into, because that is not what this report is for.  I just want whoever this gets to, to  take my accounts seriously. I am a previous member of law enforcement. I have had to listen to reports like this frequently from crazy people. I know the difference. I hope you do too.  I know what I saw. I just would like someone to tell me why I saw it.  NOTE:  The above image is a rendering.
.
KEN PFEIFER WORLD UFO PHOTOS AND NEWS
WWW.WORLDUFOPHOTOSANDNEWS.ORG
WWW.WORLDUFOPHOTOS.ORG
THANKS TO WWW.NUFORC.ORG
.
.