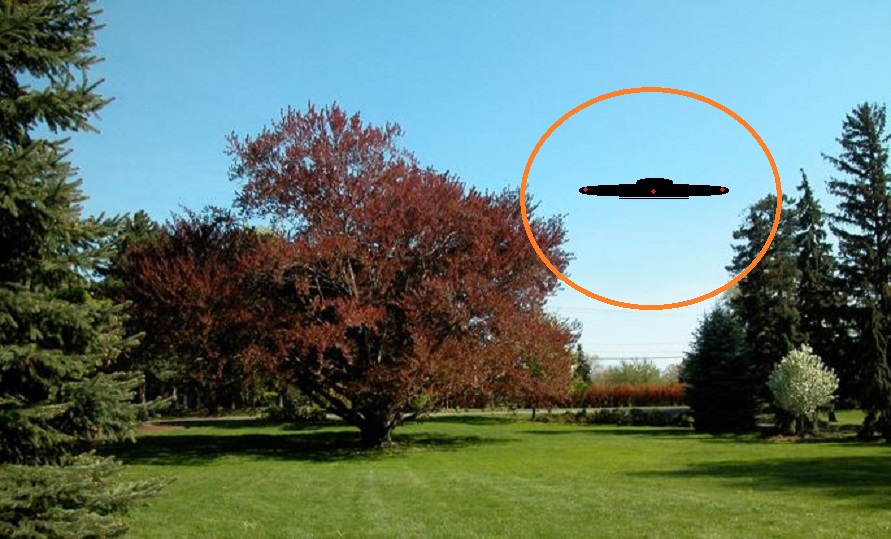 I was about 10-11years old when the incident occurred. We lived down a very long dirt road consisting of mobile homes on 1 acre each. The bus dropped us off at the beginning of the road. It was a very rural area on the outskirts of Tampa, FL called Land O Lakes. I lived at the very end of the road. It was about a half a mile walk. I was walking and talking with a school friend who lived near me. She and I were in class together. I remember that we were just walking and laughing and talking when I suddenly looked up and saw the object. We seemed to become aware of it at the same time, even though it did not make a sound.It was a very sunny and bright day. No clouds and nothing to obstruct our view. At the end of the road was a sort of canopy of trees and the craft was just hovering there. There was absolutely no noise. It was definitely hovering, although silently and with almost no movement. We could see that it was saucer shaped and seemed to have several windows or portals I do not remember how many. The object was extremely large as a family trailer was just before the trees, so it was at least as wide as the trailer was long, if not larger. We just stood there for a minute or two staring. Then, without a sound, it went from almost completely still to gone over the tree tops. I will never forget how quickly it was there and then, not there. We were terrified at that point and began to scream. Her house was closer, so we ran to there. We were quite upset at this point and I remember that her mother called my mother and we told our story to both of our mothers. Nothing was reported as I recall. They just did not know what to make of it. I have thought of it so many times over the years and thought that I should tell it somewhere.  NOTE: The above image is CGI.