In the past month I’ve had 2 other sightings while driving home on about a 30 mile stretch of interstate I-81 between mm 137 and 112. I was driving home and noticed what I thought at first was a plane flying parallel to the interstate. It was on the northbound side heading west slightly faster than traffic on the interstate. It was not a plane but the same black triangle I’ve seen 2 other times within approx a month. It had 3 white lights lights, one at each corner and they were blinking. That is why I initially thought it was a plane. It had been raining all day so it was cloudy. It went into the low hanging clouds and I lost sight of it. A couple minutes later I saw it again and it went north over the interstate at the same elevation. I saw it again a few minutes later going south back over the interstate. But this time it had 2 large glowing lights in the center of it next to each other. The lights were turquoise in color and larger than basketballs. Can’t say the exact size of the glowing lights but they were big enough to cover a good portion of the underside of the craft. NOTE: The above image is CGI.

Another witness and I observed a large triangular craft hovering (or possibly moving imperceptibly slowly) less than 50 feet above the tree line. It was less than a mile south of the National Guard station on Avon Extended. It was about 2 am, and we were driving south. I was in the front passenger seat, and the object was on the right side of the road (the side I was on). At it’s closest, we were approximately 300 feet from it. I have absolutely no doubt it was an aircraft, but of what origin I don’t have a clue. We saw the object hovering above the trees. It was roughly 75 feet along each edge, and flatly horizontal to the ground. The actual body of the object was hard to discern in the dark, but I had the impression it was dark in color. As I think about it now years later, the lights stood out much more than the object, because of the darkness. There was a single, bright white light pointing straight downward at each vertex of the triangle shape. I would estimate the lights were a foot or so in diameter. Based on the light arrangement, one of the triangle points was oriented to the north. I have seen that people sometimes report a light in the middle or on the sides. I don’t recall anything but the 3 lights in the vertices. They remained white during the sighting. I don’t recall any sound, and I’m pretty sure my window was cracked. If the object was moving, we couldn’t tell. It might have been moving very slowly. We were both too shocked to stop, or take pictures. It might seem unbelievable, but we both basically said “what the fuck is that?” and just stared at it as we drove by. Yes, we did have phones with us. I’m still perplexed by why we didn’t stop or take pictures, but it was genuinely so unexpected that it took all mental capacity just to process it. The sighting lasted less than a minute overall. I’m not 100% certain of the date. I am guessing it was July 24, 2016, because this matches the date of video of a similar object taken over Charlottesville earlier in the night, and it is roughly when I remember the sighting occurring. NOTE: The above image is CGI. 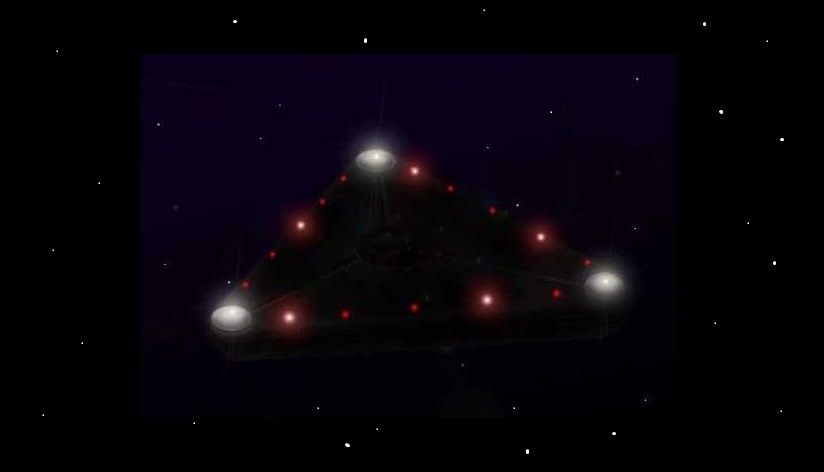 From a distance, two white lights with a red light in the middle were slowly traveling at a distance of about 2 miles. The lights did not flash, which seemed odd. I pulled off the side of the road, and while fumbling for my phone, the lights approached, at which point, a third light came into view along with the outline of the craft. The sky was clear and cloudless, and the craft was clearly a black equilateral triangle with white lights at the corners and a red light in the center. I would estimate the length of a the a side of the craft to be 25-30 ft. The lights did not blink, nor did the craft make a sound. The craft slowed somewhat at the point where it was almost overhead. As I readied my phone to take a video, it started to accelerate East. I got in my car and gave chase, but the craft was too fast and quickly disappeared in the distance. I am prior military, and this wasn’t swamp gas or a hallucination. This was a craft and based on it speed and lack of sound, it couldn’t have been using aerodynamics to stay aloft. This all occurred near Ft. Belvoir VA.  NOTE: The above image is CGI.