Synopsis:  From between approximately 2120 hrs. and  2130 hrs. (Pacific Daylight Time), one or more objects, variously described as a blue-green sphere, an oval of blue-green light, or a disc with six lights on it, was reported from multiple points throughout western Washington State.  The object was reported to change direction of flight on at least three occasions, to execute a rolling maneuver on at least one occasion, to come to an almost complete stop in two locations, to reverse its general course of travel from south to north, and to change its appearance, including its color, on at least two occasions.  One reliable observer witnessed the object to pass slowly over the center of Bangor Submarine Base on Hood Canal, approximately 20-30 miles to the west of Seattle, passing directly over the underground bunkers where nuclear weapons are thought to be stored.  In excess of a dozen seemingly independent and reliable reports regarding the alleged sightings were received by the National UFO Reporting Center between April 22 and May 11.

1. Snohomish County, WA:  A 16-yr. old male and his mother, located approximately 15-20 miles north of Seattle, witnessed a blue-green object suddenly descend from the sky, hover, and then accelerate to the south-southwest and disappear in that direction at approximately 2120 hrs. (PDT).

2. Poulsbo, WA:  Larry Swanson, a former federal employee and computer specialist, who resides approximately ¼ mile from the northeast corner of the Bangor Submarine Base, allegedly witnessed a brightly lighted, disc-shaped object glide silently over the center of that military facility at approximately 2122 hrs..  The object tilted somewhat, so the witness was able to see the ventral side of the object quite clearly, he reports.  A computer-generated graphic, provided by the witness, is shown above.

3. Auburn, WA:  A man out walking his dog witnessed a perfectly circular, blue-green ball of light descend from north to south in the western sky at 2120 hrs. at a very high velocity.

4. Puyallup, WA:  A man driving to work witnessed a striking blue-green ball of light descending at a 30-35 degree angle from north to south in the western sky at a very high velocity.

5. Shelton, WA:  A young father witnessed a blue-green ball of light streak across the sky to the west of his location.

6. Oakville, WA:  A mother and her two sons, driving west on State Route 12, located to the west of Interstate 5, witnessed a “disc shaped” object, imbedded in a cloud of blue-green light, streak from north to south in the western sky.  The object appeared to “follow the contour” of the horizon, dipping down suddenly, and then rising up again during its rapid flight to the south.  The object was reported to generate a peculiar “tail,” which streamed off the aft end of the object for a fleeting instant.  All three witnesses believed they observed three lights on the top of the disc, and three lights on its ventral side, as well.

7. Steilacoom, WA:  A woman witnessed a blue-green ball of light streak from north to south in the western sky at 2123 hrs..

8. Vancouver, WA:  A husband and wife witnessed a blue-green ball of light move slowly from north to south in the western sky.  Very peculiar appearance to the object, they reported, with a peculiar looking “mist” surrounding the object.

9. Portland, OR:  A young musician witnessed a blue-green ball of light move from west to east in the northern sky from his vantage point in the city of Portland, OR.

10. Vancouver, WA:  A male Ph.D. in computer science, driving north on Interstate 5 witnessed a blue-green ball of light, that seemed to him to descend vertically ahead of his automobile and hover momentarily above the highway.  The witness added that he had experienced some very unusual emotional reactions to the event.

11. Yakima, WA:  A law enforcement officer witnessed a blue-green ball of light moving at a very high velocity from south to north for approximately 2 seconds.  During his sighting, the object suddenly changed its color from green to red. The sighting occurred at 2130 hrs., the witness thought. NOTE: The above image is real but from a Santa Cruz California case file. 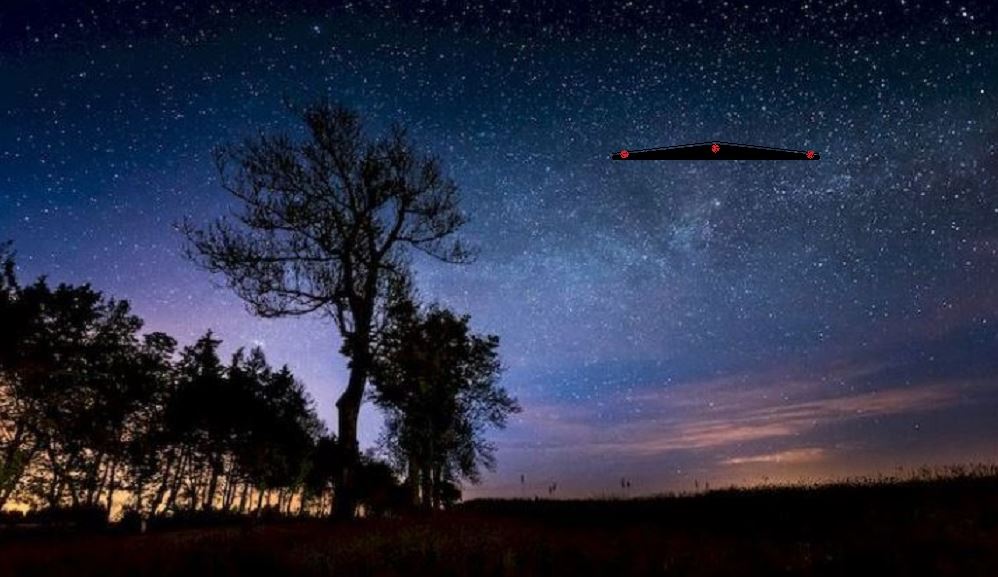 I was driving north on Interstate 5 in the San Fernando Valley at 4:50 in the morning when I noticed red lights that seemed out of place. After checking off that they may be lights on the mountain or possibly flares, I realized that the lights were rotating in unison, and in between the lights was a solid object covering a vast distance. The object was triangular and seemed a mile wide, and was taking a seemingly slow hovering path over the west valley region. However, although it appeared slow, it was covering a lot of ground. I am a Los Angeles Police Officer Recruit, and know what I saw to be an unidentified flying object.  NOTE:   The above image is CGI. 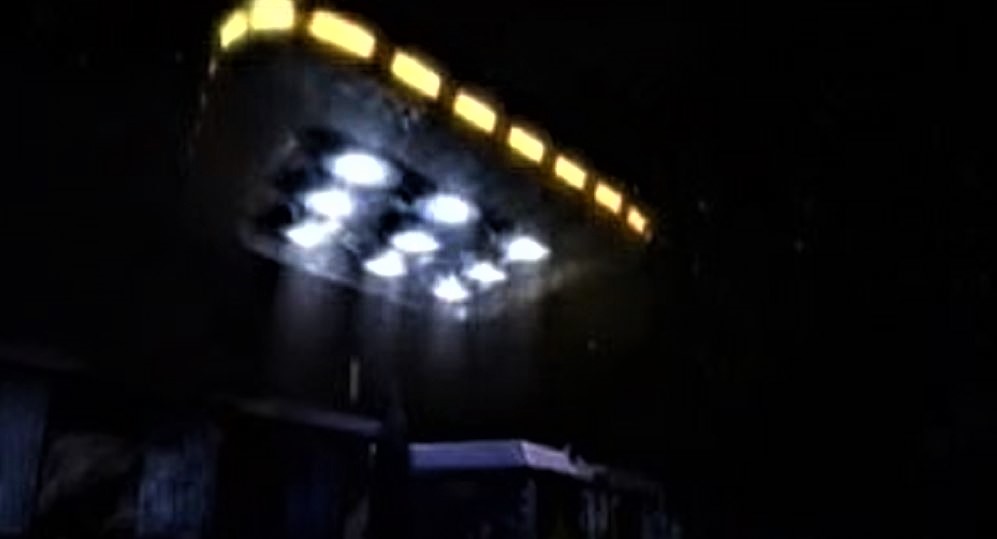 My wife and I had just gotten into bed for the evening. She was reading a book while I was on my phone. We start hearing a gradual pulsating hum. It started soft then started actually vibrating the house. I went to the window and pulled up the shade. At first I didn’t see anything and then my wife pointed out for me to look to the west. If I were to take an educated guess I would say it was maybe half a mile away and only a few hundred feet up. It was at first just hovering there. I noticed the lights were solid, no blinking or flashing. I can only describe it as a grid like elongated rectangle with multiple squares in it. The squares were red and blue and no apparent pattern. It was disk like in shape and very dark. We were in disbelief. It then started moving eastward. The pulsating hum stopped when it started moving. It wasn’t moving very fast but very steady in direction. I lost sight of it as it flew over the houses. I am in the military and I have never seen any aircraft like it. We didn’t know what to think after it flew away. I couldn’t sleep, I tossed and turned all night. Today while at work I kept thinking I had to tell someone about this. And MUFON is the most respected UFO reporting agency so I had to share my experience with you. Thank you.   NOTE: The above image is CGI.

I live in a quiet neighborhood in Washington State, near the Puget Sound (if this matters). It was 2:15 am, I decided to open up my window and get some fresh air, and when I did I heard a low-pitch humming noise. Normally my street is fairly quiet by this time of night, so I decided to head out onto my deck to see if someone was driving a scooter or something down the street. I looked out off my deck but didn’t see anything, but the sound began to get louder. I looked up and saw it, heading right towards me. It didn’t look like a helicopter (I couldn’t see any propeller, and it was quieter than the helicopters that usually fly towards the hospital). There were 5 lights in total, 2 red and 3 white. The red ones were blinking but not at the same time, almost alternating. The white ones were blinking on and off in unison. The object was about the size of a u-haul, it was made out of a steel-looking metal, it was not shiny but some light reflected off of it. When it flew overhead I got a look at the bottom, it was a rectangular shape with the front 2 corners looking like they were cut off. There was a moving disk in the center of the bottom, just spinning. It passed over the house and began to fly farther towards the water, when it was seemingly over the water its lights went out and it seemingly vanished. When I first saw it I was shocked, once it had disapeared I was very afraid, I went inside and stayed away from all windows.  NOTE: The above image is CGI.