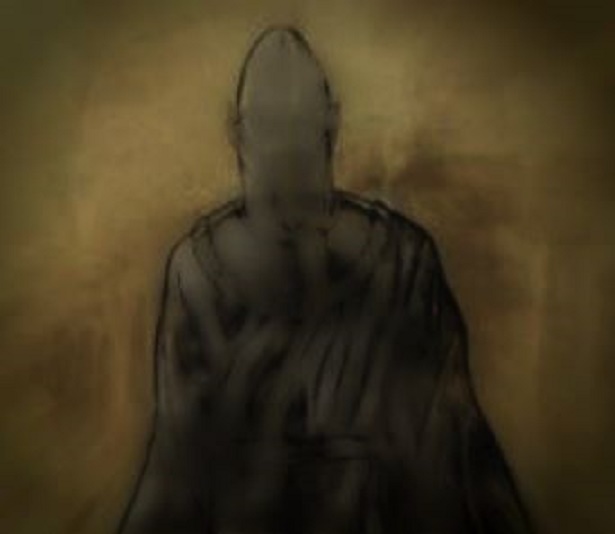 PHOENIX ARIZONA ALIEN ENCOUNTER
.
DECEMBER 2015  ………..  PHOENIX ARIZONA
.
Lon Strickler reports :  I received an inquiry on Wednesday from an elderly woman in the Phoenix suburb of Surprise, Arizona. She witnessed 2 humanoid beings standing outside her bedroom window a few days before Christmas 2015. The following report includes most of the information from the incident…though there are a few personal notes that I have redacted. I called and talked to the witness Thursday night in an attempt to gather more details.  I am presenting this case to the readers and other investigators as a means of gathering additional data and knowledge about these beings. The witness was extremely alarmed by the incident and she is desperately seeking answers.  Around 12-21-2015, I woke up about 1:30 am. I glanced out my bedroom window, and this is what I saw: Two gray short people like figures with cone heads. The tallest stood there approx., 4 ft tall, and the smallest one about 3 ft stood directly in front of the taller one. They just stood motionless. I looked, then looked again, as I have never seen anything like this EVER! I set on the edge of my bed and I just kept looking at them. They didn’t move. Neither one of them had facial features at all. It appeared to me they had something over their heads to hide their appearance. I didn’t let my dog out, as I didn’t know what could happen. I laid back down in bed, I went to sleep! I didn’t awake until the next morning 8:30 am. 7 HOURS?  I called the police a week or so later. They just told me to go to the ER or to call the Crisis Ctr., then they wrote down the tele# of Crisis Ctr., and they left my home.
.
About a week later I went to my church, the priest didn’t believe me, or didn’t want to discuss, this alien encounter! I have done a lot of research online, and these Greys, with cone heads have been seen before, and are described as I have described them. I have never believed in UFO’s or Paranormal sightings, or have I ever viewed any web site on my computer until after I encountered these 2 Grey little people looking in to my bedroom window.This was not a dream! I was completely awake! No medicine I take has any side effects, that would cause me to hallucinate! I am a senior citizen, I am living alone. This has scared me. They have not come back! I worry that they might come back. I have so many questions. I also called CH 113 EWTN TV. The person I talked to at EWTN didn’t believe me and did not want to discuss the matter. Please e-mail me. I have not told my friends or family. Please help me with answers I have. I pray daily that I never see them again!  I called the witnessed and received more specific details…though most of it was personal. She did state that these beings wore full-length cloaks that were the same color (grayish-brown) of the cone-like covering over the head and face. The cone was more like a helmet. She also stated that she never sleeps more than 3 hours without waking…but she slept for an uninterrupted 7 hours, which she states she has never done before or since.  There was a NUFORC reported UFO sighting over Surprise, AZ the same night of the encounter:  Duration:10 seconds – A blue oval light shot over the house behind a tree then shot back the same way it came from behind a tree line it happened so fast.  After receiving the additional details, I came up with one possibility…though I would appreciate other theories.  In some respects, these beings remind me of the descriptions for the ‘Teros’ species…a supposed Earth underground dwelling race of humanoids with cone-shaped heads. They do have human-like facial features, so this may have been a face covering of some type. They are also referred to as ‘Sunaynans’…’The Yearly Ones,’ an ancient race that appears at a certain time of the year. Some of the early native people of North America made reference to them…mostly in the desert Southwest. So this sighting does kind of parallel the legends since this occurred in Arizona.  Once again, any information that can be provided to me would be appreciated. Lon Strickler    NOTE: The above image is the witness rendering.
.
KEN PFEIFER WORLD UFO PHOTOS AND NEWS
WWW.WORLDUFOPHOTOSANDNEWS.ORG
WWW.WORLDUFOPHOTOS.ORG
THANKS TO LON STRICKLER AND
WWW.PHANTOMSANDMONSTERS.COM
.
.