“I’m Mike calling from Galloway Township in New Jersey. I got a weird story. I’m a police officer and Galloway Township is kind of a rural area. We’re on the outside of Atlantic City. We were dispatched…this was back in October. I don’t know if you have ever heard of the Jersey Devil. It’s like an old wives tale. I never encountered it myself but back in October in the early part of the month, around midnight, we got dispatched to a motor vehicle accident on Route 9 which kind of connects to Garden State Parkway which loops around to Atlantic City. We get out there and the car is in the middle of the road. It’s a Nissan Altima and it’s got significant front end damage. The driver’s in kind of a daze. He and his wife were in Atlantic City and they thought they had hit a deer. Now, the damage to the car is not conducive with a deer. Me and the other officer that responded, we looked, but we could not find a deer. And while we’re there, and I’m a cop for like 23 years, I just got this foreboding feeling like I’m being watched and I swear I could hear a grunting noise. The damage to the car was significant. We loaded it away, it went on a flatbed. It was like it hit a fixed object. If a car hits a deer, you normally see like deer blood in front of the car or it goes up and over the hood or cracks a corner panel or something, but this looked like it went right into a pole. The guy said, he didn’t see anything. He just remembers hitting something. And the two odd things, he was going north on Route 9 but the car was almost facing the southbound, almost like it had pivoted around whatever it had hit. The next day, the officer and I who investigated went out on the early part of the shift before the sun was set and we searched the area. We couldn’t find anything but I swear as we checked the sides of the road, like the treeline, off of Route 9 going into the tree-line, I swear it almost looked like Ostrich footprints. I mean, I’m looking at them going, ‘Mark, this is too big. This is not a deer print. And it’s not a man’s print’. It’s like an Ostrich and that’s not indicative of this area of South Jersey. So we started talking back at the station that this might have been the Jersey Devil. We never saw anything. We were spit-balling later back at the station, like what did this guy hit?

He didn’t hit a deer. It was so large. It was right there in the road. It was a clear stretch. Speed limit is 50 miles an hour. It’s one way in each direction. It’s a two lane road. It’s not lit, it’s kinda rural. It’s like a cut around the parkway and whatever he hit, it was significant enough to bend the car around. (Art Bell, the host, asks about the driver, how fast he was going). We didn’t quiz him too much but I’d say probably say he was gong 50 or 45 to 50. When we did the write-up, there was no fatalities so… (Art mentions that they should have been able to find the animal he hit). Yeah, if it was a deer… That’s why we went back the next day. If he hit something, it would have been thrown to the side of the road. There would have been enough trees to stop it from gong too far into the wood-line but we didn’t see anything except those Ostrich sized footprints. And we didn’t follow it into the Pine Barrens but it was like too strange. This was back in October. There was no follow-up. I never heard from insurance about the scene or anything. I tell you when we drive down that stretch of road everybody always says, you know, we’re going a little slower and shining the spotlight. And you’re out in the middle of nowhere. And I said, that night, while we were hooking up the car and taking it away, I’m getting the sense that something’s watching me. You just get the sixth sense as a cop, you know, you’re not alone out here. This was too strange. And I couldn’t figure out what he hit. If it was a deer it would have been there.” 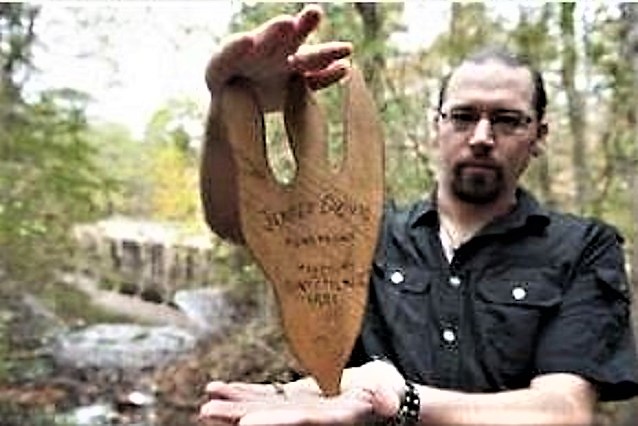 NOTE: The top image is CGI.