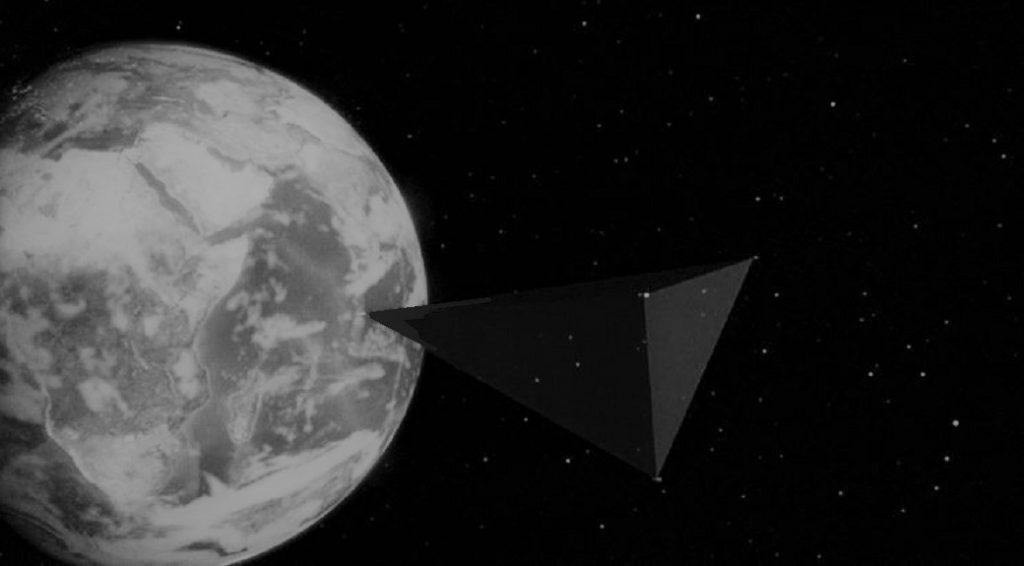 At almost 6pm exactly, May 21st 2018 at the public parking lot located directly in front of Augie’s Coffee Shop located at 113 North 5th Street in Redlands, CA 92373 I witnessed a geometric metallic craft moving slowly from West to East then stop and return from its original direction. I was driving my car into the public parking lot waiting for a parking spot to open up when I heard a large jet aircraft fly over at about an 8,000 feet. Curious, I looked out my car window as I waited for a driver to reverse out of a parking spot and noticed the jet aircraft, which appeared to look like a very large Learjet about the same size Southwest Airlines jet. Knowing that Learjets are not that large, I thought it was very strange. It was at this point that I noticed a small black dot moving very slowly from West to East almost directly overhead and stop. I thought it might be a cluster of balloons at first then perhaps a drone but realized it seemed to be about 15,000 feet up but below the cloud level, a solid object and completely silent. I expected the object to continue in a straight flight path when I was shocked to notice that it slowed then stoped and hovered while rotating on a horizontal axis.

The shape of it seemed to be a tetrahedron with a pointed side facing down. I was able to see reflections of the setting sun on it as it rotated slowly. Once parked and out of my car, I pulled out my iPhone 6 to attempt to video what I was seeing. I noticed some other people close by and wanted to inform them of the sighting. I initially informed about four people of the craft and they all saw it. Then when those initial four had seen the craft, others walked over from the coffee shop that I was originally heading towards and saw the craft too. There were about 12 to 15 people who all saw the small object hover and rotate contrasted with the clouds in the background. The object seemed to be about the size of a small car. After about 3 minutes of witnessing the object with the other people, I noticed that the craft had moved back in the same direction that it originally came from when I first saw it. So moving from West to East originally, stop, then East to West. Then myself and the others were no longer able to see the craft contrasted on the clouds behind. My reaction to the event and the other witnesses reaction was amazement and excitement as they and myself all felt that we had all witnessed a genuine UFO! I immediately, called my brother on my cell phone and he recommended that I write this report here. The entire sighting took place approximately between 5:55pm and 6:08pm.  NOTE: The above images is CGI.