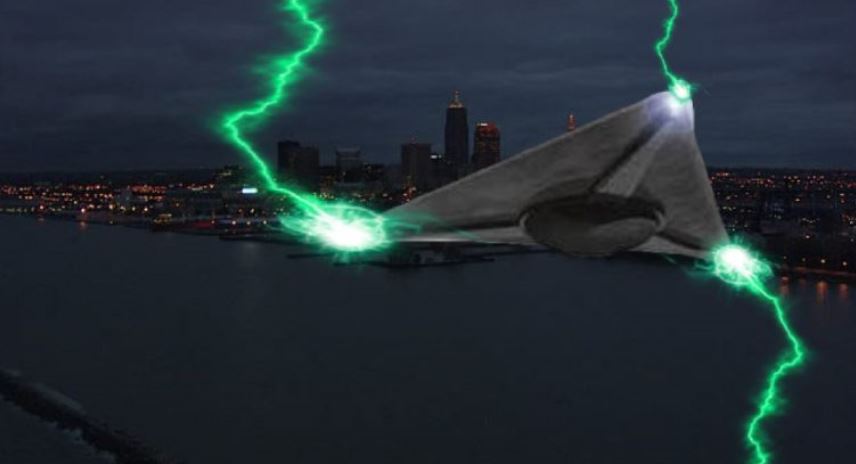 Although figures vary between different UFO organizations and groups, just under half of all UFO sightings take place near to a significant body of water. This statistic alone creates many theories as to why this might be. Some believe “alien bases” reside deep down at the depths of the Earth’s oceans, seas, and lakes. Others speculate that these cosmic crafts use the underwater world as a way to traverse the planet. Some even go as far as to suggest that “portals or gateways” may exist, or be created under the water, which allows travel to elsewhere in the universe.   One of these bodies of water, Lake Erie – one of the “five great lakes in North America”- is one that has a plethora of UFO sightings to its name. The ancient lake runs from the Ontario Peninsula in Canada and has shores in four US states. One of these US states, Ohio, was the subject of a highly detailed sighting of a strange, and still unexplained object in March 1988. Not only were there multiple witnesses to the events, these would include two members of the Ohio Coastal Guard, who would make an official report.

The Baker’s Usual Friday Night Drive Was Anything But!

The Baker family would eat out every Friday evening. Sheila and her husband, Henry, and their two children looked forward to it each week. On Friday 4th March 1988, all four of the Bakers were driving home following their usual Friday night meal. It was a little after 8:30 pm. Henry was driving, and the two children were in the back. The heavily pregnant Sheila, meanwhile, looked out of the passenger window at the frozen Lake Erie. The ice almost shined in the moonlight. Then, she saw a strangely lit object “rocking on the surface” of the lake.  She nudged her husband who took his attention away from the road for a moment. He could see it also. At Sheila’s insistence, he would turn the car’s direction towards the waterfront. Once there, they instructed their sons to remain in the vehicle before opening their car doors. They stepped out into the cold night and began to cautiously make their way the to the water’s edge. The lights were still there. What Sheila first noticed, though, were sounds that appeared to be the ice of the frozen lake cracking. She would liken them to “claps of thunder”.  As they got as near as they could without stepping on to the ice they could clearly make out a “football-shaped object” with bright white lights at either end. The object itself appeared to be of a “gunmetal gray” color and was hovering overhead as opposed to being on the surface. Despite the obvious movement, the strange craft made no noise whatsoever. All Sheila could hear were the sounds of cracking ice.  Suddenly, as if it had become aware of their presence, the object “swung towards them”, heading in their direction. Panicked and frightened, the couple turned and ran back to their vehicle.

Still Visible From The Baker Home

Henry would drive the remainder of the journey with alacrity. Once the Bakers arrived at their home and settled their children in bed, Sheila would contact the police to report the sighting. They would tell her that she would have to make the report to the Coast Guard. She did, and despite their initial refusal to deal with the case, would eventually agree to pick them up and take them back to the waterfront.  Meanwhile, the Bakers could clearly see the object hovering over the lake from the window of their house. As they watched, six independent triangular objects suddenly emerged from the larger one. They would move around the main object in a darting motion, before stopping suddenly. They would then move in the direction of the Perry nuclear power plant.  The Bakers would ask a neighbor to watch their children, and when the Coast Guard arrived, they would accompany them back to the lake. According to the officers, James Power and John Knaub, several other reports (including from their own employees) had come in regarding the object. As the coast guard’s vehicle pulled up at the waterfront, the smaller triangular objects were once again circling the main craft.  As soon as the coast guards opened their car doors the sound of “rumbling ice” met everyone’s ears. This was constant, as if the object’s purpose was to crack the ice and gain access to the water below. The coast guard’s report would state, “The ice was cracking and moving abnormal amounts”. Whenever the object came closer to the surface, the cracking sounds became more intense. The coast guards would radio back to their control base stating that “the object appears to be landing on the lake”.

The coast guards would continue to advise the control room of the situation. As the triangular crafts became active once more they would report that “there are other objects moving around it”. Furthermore, these objects were “going at a high rate of speed”.As Sheila and Henry, along with the two coast guards continued to watch the fascinating display, they noticed one of the triangles suddenly turn in their direction. It was heading straight for the coast guard’s vehicle. Right before what seemed to be an inevitable impact, the object veered upwards in a “blur of light”. It then returned to the main, larger craft, as did the other smaller, triangular objects.  All the while, the sound of ice cracking continued. It seemed that the previously bright, white lights of the craft were now beginning to flash and glow in a display of red, blue, orange, and green. The craft itself appeared to be descending. The lights went out for a second and then returned.  And then, without warning, the lights and the rumbling audible carnage were gone completely. The witnesses were not clear if the craft had sped away or if the lights had simply gone out. Perhaps it was still hovering over the ice only now they couldn’t see it. Sheila, though, would voice her suspicion – for reasons she doesn’t know – that it had plunged directly below the ice and into the frozen waters.  Although several of the smaller triangular objects were seen flying directly overhead a little later that evening, the larger craft didn’t reappear. One of the coast guards would report that the triangular crafts behaved as though they were “scouting” the area. None of the coast guards could identify any of the objects they witnessed.  NOTE: The above image is CGI.