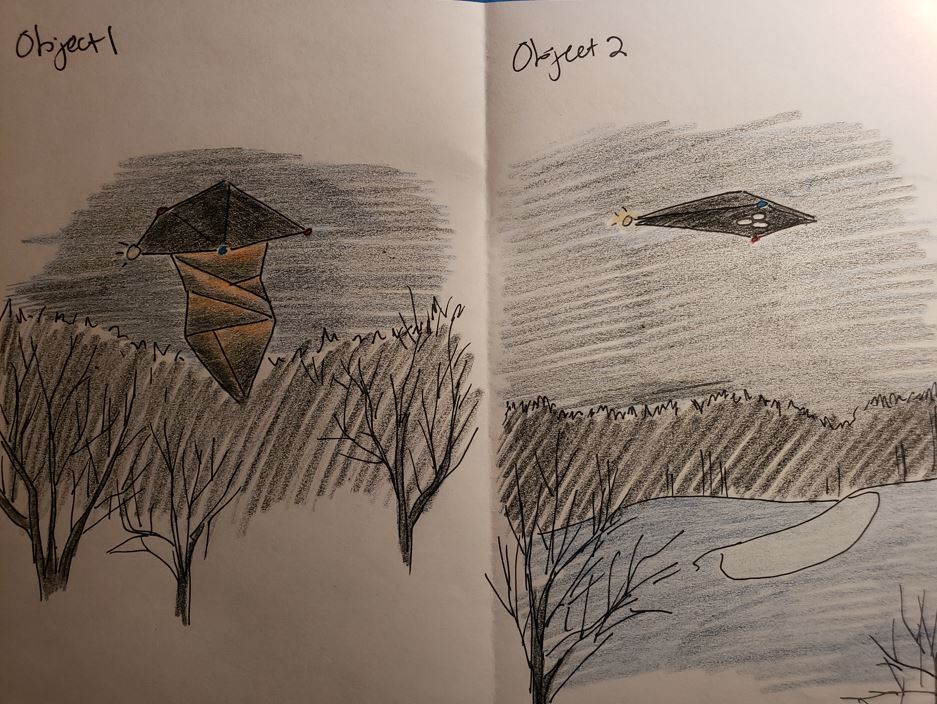 Clear night with full moon, not a cloud in the sky. My father had picked me up from the airport (Bradley International) and brought me to pick up my car at my boyfriend’s house in Granby. He followed behind me on my usual southbound route home from there. By the time we got to Terry’s Plain Road, I could see a white/cream light through the trees in the distance. My immediate reaction was to label it as a helicopter. Then, I remembered that I’d seen a “black triangle” in the same area about a month previously (Jan 13, I made a separate report). My first thought on Jan 13 was that I was looking at a helicopter, as well. I figured I’d just find out as I kept driving. As I got farther down the road, I could see through the trees that it had other, smaller lights in red and blue, that it wasn’t moving, and it definitely wasn’t a helicopter. Those were characteristics of my first sighting, but unlike my first sighting, the shape was considerably more blocky, so it didn’t remind me of a black “government” plane either. Since I’d seen a UFO in that area before (two or three miles down the road), I wanted to make sure my father saw THAT thing, too. I put down my window and pointed furiously to the left to make sure he’d see it. Right about then, the trees opened up into a small field on the left and sure enough the “craft” was suspended still in the air, just at the treetops behind the field. For maybe 5 to 10 seconds I got a good look at it (although, I kept turning back to the road). I can only describe it as being “jellyfish-like,” in the sense that it had a black and blocky, angular top with the white, blue, and red lights on it, but suspended from it was a geometric form with many angles (which I’ve tried to approximate in an accompanying drawing.) The suspended form seemed to be dimly illuminated in places, so some of the angles were lit up with a faint orange-y glow. The full moon helped show the form of the top. It was black, but not reflective.

The top portion reminded me of the UFO I saw previously. It had the sharp angles, and the lights were the same colors, but it definitely wasn’t a simple “triangle.” When I turned onto Nod Rd. I called my dad. I was relieved he saw it too. He said the only thing he could think of that had lights and didn’t move in the air was MAYBE a helicopter, but that it obviously wasn’t one. We agreed that we had no idea what it was, hung up, and kept going. Once on Waterville Rd. in Farmington, about 15 minutes later, I saw another white/cream light through the trees. Again, my mind was quick to say “helicopter,” but at that point I knew better. I thought, this CAN’T be another one! Once we drove closer, a few minutes later, it again became apparent that the light in the sky wasn’t moving. When we got to the golf course, I saw (through the treetops) that it also had blue and red lights and was quite wide. More like a plane and not a helicopter. I was quick to point out the window again to make sure my dad was seeing that one, too. The trees opened up to the golf course at the Farmington Country Club and I could clearly see the craft. It was also suspended, non-moving in the air above the open golf course. This time a little farther up than the treeline. I could clearly see the craft because of the moonlight and it appeared to be kite-shaped. It was a longer or equilateral triangle up front, tipped with the white light, and a squat triangle off the back. One side point had a red light, the other a blue light. The bottom was flat and it had a slight bit of shape on top. It, too was black and non-reflective. The craft also had three pure white lights on the bottom, right in the center in a triangle formation. I’m convinced it’s the exact same craft I drove under on Jan 13, 9 miles up the road in Simsbury. I couldn’t tell that it was particularly kite-shaped then, but the moonlight on Feb 20 made the complete shape visible. I lost sight of it behind the country club building on Rt. 4. I quickly called my father again and he confirmed that he saw it, too. I told him that it had to be the first one I saw a month ago, as it looked nearly identical. We figured that the two we saw must’ve been linked somehow because they were in such close proximity. We had no explanation for that craft either, as we’ve never heard of or seen an aircraft, or piece of machinery with lights, that can sit un-moving in mid-air. I drive the route every other week, so if I see any more, I’ll try and take a picture.  NOTE: The above image is a drawing by the witness.