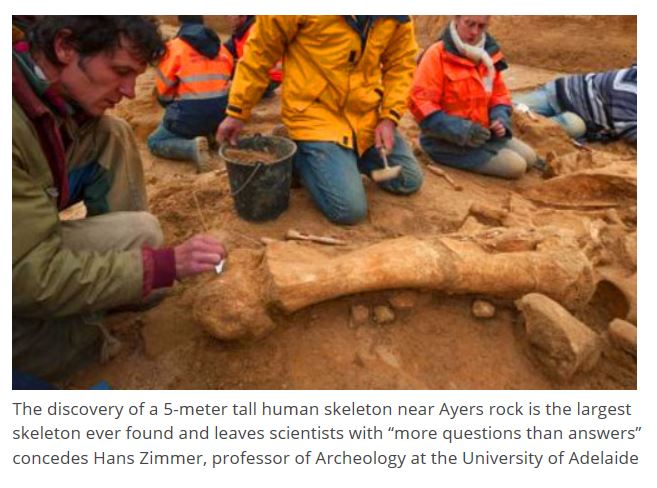 The gigantic hominid specimen that measures an incredible 5.3 meters tall (17 foot and 4 inches) was discovered near the ancient ruins of the only megalithic civilization ever discovered in Australia, which makes the discovery twice as puzzling admits professor Hans Zimmer of the University of Adelaide.  “The discovery of the Uluru archeological site last year already took us by surprise, but this new find is just jaw-dropping” he admits, visibly dumbfounded.  “Theoretically, a five-meter-tall hominid cannot exist. How did this occur? How is this possible. Although this discovery is fascinating, we are left with more questions than answers” he concedes.  Some experts have hypothesized that the specimen might have suffered from an extreme case of gigantism, a condition caused by the over-production of growth hormones, a theory professor Hans Zimmer dismisses as “pure speculation”. 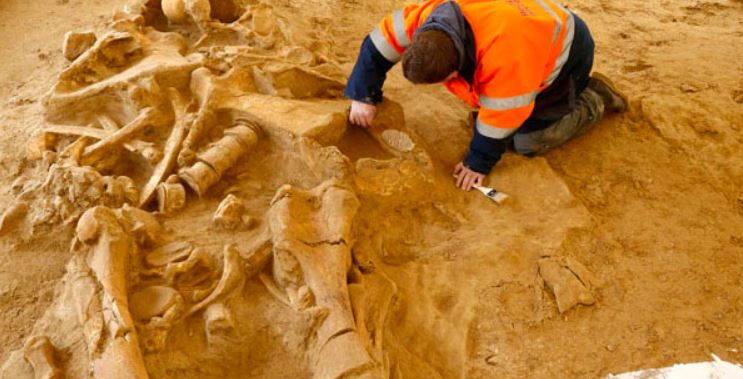 “Only further research can help us uncover the truth behind this anomaly of nature. Until we have found more skeletal remains, we should not rush ourselves into hazardous Explanations” he told local reporters.  “We have found several incomplete skeletons, of which the bones were also of gigantic size. It seems a major catastrophe has completely washed away all traces of this lost and unknown civilization” he notes.  “This specimen is apparently not unique, it is but a question of time before we find a similar specimen” he firmly believes.  The Uluru archeological site, unearthed in 2014 by a team of researchers from the Australian National University, led to the discovery of a previously unknown megalithic civilization that could help solve the mystery of the estranged discovery.  “We have unearthed last February a megalithic block that is estimated to weight an approximate 80 tons.  The basalt qualities of the monolith are found only 200 km away.  How did they move this huge block hundreds of kilometers into the desert, what technologies did this civilization use? We cannot properly answer these questions at the present moment” admits John Thomas Buckler, head archeologist during the 2014 excavation.