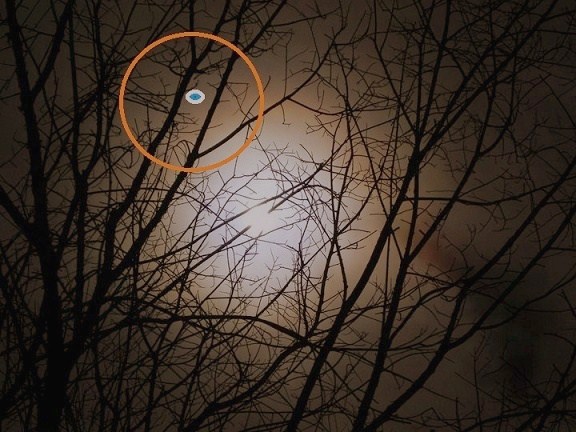 My phone rings and it is my 20-year-old son who was about 2 miles from home at a friend’s home.

He next asks me if I heard that plane. I quickly moved outside and continued the conversation and told him there were no jet sounds at my location.

His description was that 2 low flying military jets were hitting their after-burners above the residential homes.

The jets shook the foundations and rattled the window frames forcing the occupants to step outside to see if a plane was in distress.

He then described over the phone only hearing the jets and never physically seeing them.

What he did see was an erratic, fast moving star-sized object one half to one mile altitude making no sound as if it had escaped the jets, and continued its evasive darting and circling flight pattern over the Herndon/Sterling area.

The jets flew within the vicinity for a second pass, but at this point nowhere near the strobe flashing object.

His description of the object was a fast 3 pulse strobe of blue/white light followed by a quick single flash then returning to the 3 pulse strobe.

The movement was extremely fast with quick turns and circles.

The object was out of sight quickly as it is a residential neighborhood with a limited range of low altitude vision.

The object was definitely outrunning and eluding the military craft.

They wanted it and had no chance whatsoever do to the speed and maneuverability of this object. This object owned the sky!

This area is a no fly zone for small general aircraft as we are 20 miles west of Washington, DC, and as mentioned, the final approach for Dulles airport.

Any military jet traffic is only for intervention and policing of this no fly zone.

The low altitude of the jets scrambling in this vicinity would definitely be monitored by Dulles FAA authorities and force a change or alteration of incoming commercial air traffic.

Being an almost daily MUFON reader I believed my son’s sighting was worthy of reporting.

KENS NOTE:  There were two more sightings reported from the same area of Virginia within a couple of days.  Something strange is happening around the Washington D.C. area.  Andrews Airforce Base has been very busy….. Special thanks to UFO Casebook and MUFON’s case file system. The above image is a rendering.