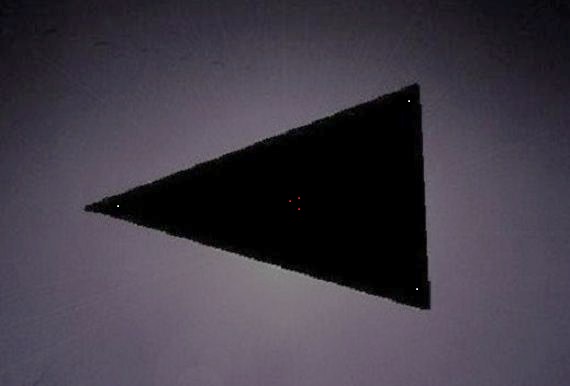 It was about 9 O’clock on December 8th 2006. I was at my moms house which is a duplex. She lived on the second level, the stairs to get to the second level were on the outside of the house on the east side. My mom was in her bedroom, the west end of the house. I was in the living room with my brother at the east end by the entrance to the house. He asked me if I wanted to smoke a cigarette, I said no and he went outside. About 30 seconds later he came rushing back into the house yelling at us to go outside. My mom came walking up from the back room and I jumped up from the couch and followed him outside. He pointed up in the sky to the north and said Look!. I saw searchlights. The weirdest thing about the searchlights was that they were low laying, other than being in the sky. The “Main” searchlight, which my brother was pointing to was fixed and not moving. There was a second searchlight more east, to the right of us, that was “scanning” left to right. What I asked, I really didnt notice anything. There! Just then I recognized this massive object gliding straight for us. The searchlight was fixed right on it and just then I realized the lights were from the Saint Paul Airport. What I saw was this massive black triangle. It was as big as the entire block. There were lights fixed on the black mass, Orbs that glowed and changed colors, but more appeared to be multiple colors at the same time. This was more reminiscent of the Phoenix Lights than the Belgium Lights. The only thing that was different than the Phoenix Lights was that all these lights were connected or attached by this large blackness. When the UFO was passing and the Searchlight was fixed on it, you could not see what the blackness was. You could notice the beam of light as it passed under it but when the light hit it all you could see was just black, black like the night sky behind it. The sky was clear and stars were as noticeable as they could be for being in the city. I really don’t have memory of the UFO being directly over head but I know for a fact it was. I remember turning to watch it pass us, and head south/southwest towards MPLS airport/Bloomington. We were leaning over the edge of the railing, as it got more out of view. At the same time we all stopped and looked at each other in sheer amazement, and looked back to the craft and it was completely gone. There was no way that it was out of our view by the time we looked back, it still should have been there but we could not see anything. My mom tried the cordless house phone which was in her hand the entire time but it was not working, about 5 minutes later the phone began working again. She called my grandpa, her dad, Whom happened to live right next door. He came outside and saw the searchlights and we told him what we just saw. about 2 minutes after then, we kept watching the sky and we noticed UH-60 BlackHawks, and some types of Fighter Jets scrambling in the area for the next 20 minutes. During the Duration of the UFO it was really strange. There were no sounds from any vehicles, the UFO made no sound, I could not hear anything except for us breathing. It was really weird not hearing any vehicles since there is a very busy street just 1 block south of our location. My brother and I stayed outside watching the searchlights as they continued to scan the sky, and the Jets circling over head. 1.5 to 2 hours pass and the searchlights remained on, after that time we just decided to go back inside. This is the first and only report I’ve done.  NOTE: The above image is a rendering.