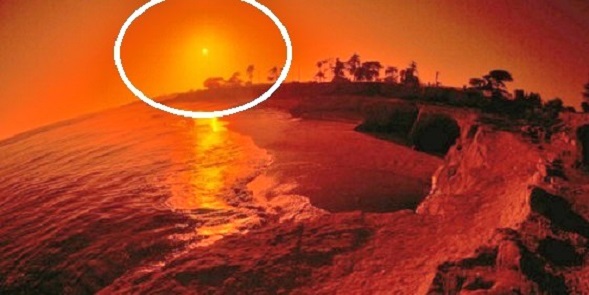 MOTHER AND SON WITNESSED A STRANGE OBJECT OVER MICHIGAN

Hello, I would like to take this opportunity to tell about the UFO experience my adult son and I had several months ago. Location: Southern Michigan Date of sighting: September 3rd, 2012 Time: approx. 7:30 pm mostly dark but sky still had light. My son was outside doing yard work etc. and called for me to come outside with him. I’m on oxygen but did make it out there to see him pointing to the sky. Once out there I looked up and saw two round disks or saucers but they were in a vertical position side by side very close together. The distance away was hard to discern but my best guess was somewhere between 2500 – 3000 feet away. The color was a very vibrant orange with a kind of red tint. The surface of both was strange in that the color texture kept moving within each disc. My son who witnessed this with me has better eyesight than me said he could see small reddish flames flicking out all around the edge of each. Lately, I’ve been wondering if maybe the whole face of the disc was in flames as explaining why the surface of each moved around in orange/red. Then I wondered if maybe rather than discs always on their side might actually be round spheres so then the whole outside surface might be aflame. Maybe caused by entering our atmosphere or from the friction of flying so fast within our atmosphere. I’m no expert just guessing. Then after a short time maybe 2 minutes I saw both UFO’s begin to rotate clockwise. This was the whole surface of each. They started rotating at the same exact moment very slowly to start. It was like they were under one control considering how much in sync they moved. Very quickly the speed of the rotation increased until the surfaces were a blur and at that point they moved off very slowly to the southwest. They went a ways and then they either vanished or sped away faster than the eye can see. Oh, I did want to mention that the UFO’s appeared to be self illuminated but then they would be if they were on fire. Sorry but did not get a chance to take pictures. Its very hard to determine the size of the crafts but my immediate thought when I saw them was that each was approx. the size of the moon when it is in the stage where it seems bigger than normal. These were a little bigger than that. I know not very scientific but best I could do. Also, no sounds were detected at all from these UFO’s. I hope that I was able to describe this sighting in a way that’s understandable. I welcome any questions or comments.  NOTE: The above image is a rendering.