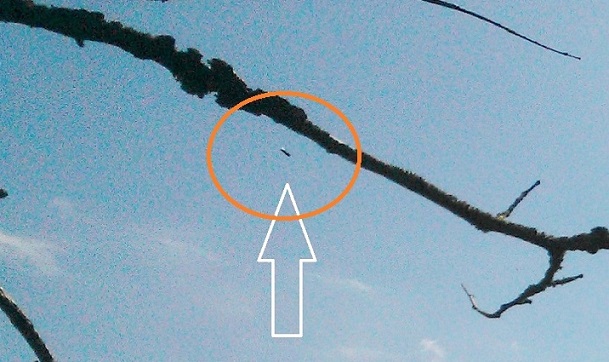 It was approximately ten am or somewhere around that time.  The Sun was still low and to my right rear from the building that I just walked out from.  I decided to have a cigarette,while smoking said cigarette I was looking around the work site and while doing so I also looked to the sky, no particular area just around. When I looked to my left I observing a large low puffy cloud at that moment an object came from its cover.  Just to make note, I probably would have missed said object if it had not reflected the sun off its surface. after leaving the cloud cover. The sky was blue with visilable clouds in the far distance. The object was long tube like, more like a cigarette and the clouds were low.  Mistaking it for a jetliner was impossible.  As it moved away from me in a westerly direction I noticed it made no noise what so ever.  Its surface seemed opaque slightly white.  As I stood there in awe watching it move over the site I did not blink for fear of losing contact with it, as it moved further away at a very high speed.  It appeared to blend in with sky.  Its speed was not that swoosh movement we all see on the big and small screen it was a steady deliberate speed. It was low enough to know it wasn’t a conventional craft. I’ve observed lots air craft around the plant and this did not fit the bill. It took all of about three seconds to leave my sight as it faded away over the the hills in the distance then the ocean beyond. I feel blessed to have seen it and hope to see more in the future.  NOTE: THE ABOVE UFO WAS SPOTTED OVER ATWORTH ENGLAND ON 8-1-13