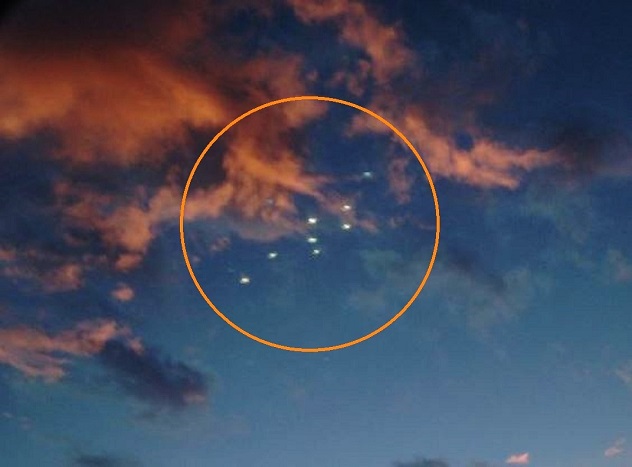 At 7:40 in the evening, I went outside and noticed a bright, white light above the tree line. I assumed it to be a plane, then saw two more lights appear next to it. Still thinking of planes, I thought they were too close together, and I was about to witness a crash.  In that same second, more lights came into view and the original 3 faded. There had to be around a dozen or more. However, their lights all kept fading in and out. As soon as one faded in, another faded out. They were not in a straight line; rather they were almost like a scattered zigzag. I was unable to count them due to their fading in and out (and when this occurred, it wasn’t all of them at the same time. As one would fade out 2 or 3 more would fade in).  They were slowly moving towards the Grovetown area and were spotted above the tree line right outside Fort Gordon in between gates 1 and 2.  After close to 3 minutes of observation, one went bright orange (the light emitted was significantly bigger), then faded out.  Immediately after, another did the same to the left of the first one (all while the other white lights were still fading in and out). Then a third.  They continued slow movement afterwards towards the Grovetown area; two broke away and were slowly coming in the direction of my house. As they were too close for comfort, I immediately ran inside locking the doors.  I looked out again 2 minutes later and observed 2 lights still lingering.  Then about 3 minutes later, I heard a helicopter and looked out the window again; the unknown lights were gone; however, the helicopter circled the area for a good 5 minutes.  I did try to record the lights on my iPhone, they didn’t pick up though, which is unusual because they weren’t that exceptionally far.  I was scared and shaking though and was more interested in keeping my eyes on whatever they were while fumbling to turn my recorder on, on my phone.  NOTE: The above photo was taken on 11-19-13 in Picayune Mississippi.

1 thought on “HELICOPTERS SEARCH FOR MYSTERIOUS LIGHTS OVER GEORGIA”