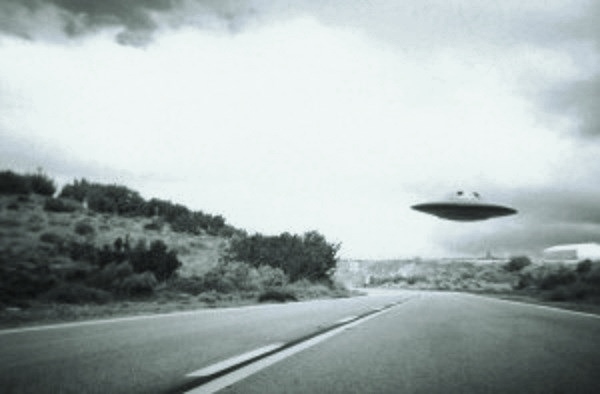 I was coming home to Madera from Disneyland with a church youth group  in a Chevy Sprint. We had some short range hand-held radios in each of maybe 4 or 5 cars so we wouldn’t get separated in Los Angeles.  We got off Freeway 99 out at Ave 12 (southern outskirts of Madera) and turned left going back over the freeway facing west to take the first guy home when some girls in one of the other cars went nuts on the radio talking about a UFO. I was dozing off in the front passenger seat. The driver and the guy sitting behind me were wide awake. The other guy was completely asleep for this entire experience. When the girls started yelling about the UFO I started to wake up. As we came down off the overpass the driver slowed down as he looked at the object. Firstly, I have to say that all I ever saw was a light. My eyes were blurry from sleep. The other 2 guys, who were not prone to exaggeration at all, said that they saw a saucer shape with a rectangular window and 3 or 4 humanoid shapes in the window. Again, I just saw a light and it was about 1000 ft away and 1000 ft up. When I first saw it, it was moving very slowly from south to north (my left to right). Then it stopped still. All at once, our cars engine and lights shut off. So did the cars stereo and the hand-held radio. The driver just said, “Wow!” or “Wo!” or something like that. I asked him what happened, but he just shook his head and said he didn’t do it. Then the object/light in the sky shot from its position to about 1000 ft or so to the right (north) and stopped dead still again. It didn’t accelerate. It just went from 0 to full speed in an instant then stopped dead still again without slowing down. It stayed there for a second or two then it shot up again, but this time at about a 45 degree angle up and away from us into or through the atmosphere and looked like it shot right into space. Basically, when it left it looked like a shooting star going the wrong way. At the same time, the cars lights and the radios both came back on. The driver just put the Sprint back in Neutral and pushed the clutch in and started the engine back up. The guy that was sleeping was the one we dropped off first and he never even woke up until we were letting him out. I got dropped off 2nd and I ran to my door and almost dropped my keys trying to get inside because I was shaking so badly. Now that I’m older, I don’t believe it was little green men. I’m sure there is some form of life out there somewhere, but I think the military was having fun with us or testing something that night. The only thing that isn’t easily explainable is the things movements. I often wonder if all, I was seeing was some kind of light or projection. It just moved too fast to be believable. What happened to the car was real enough, though. I just wish I had been completely awake and my eyes had been 100%   NOTE: The above image is a rendering