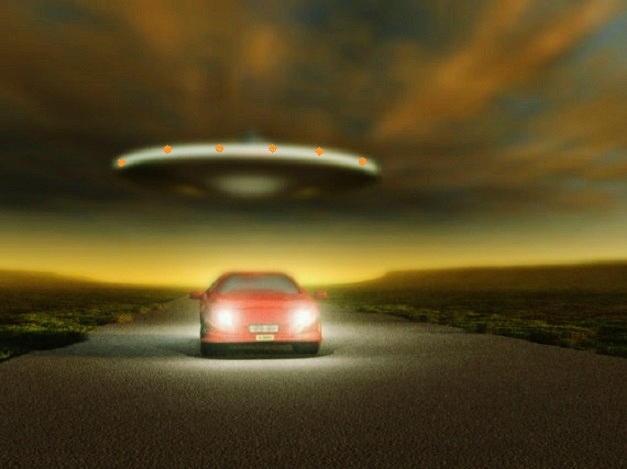 As reported to ASD by phone today: I was driving South on Woods Chapel Road last night at approximately 7:00 p.m. when I noticed several bright orange lights above the cars behind me in my rear-view mirror. At first I thought it must have been some strange light on someone’s antenna, but realized that it was floating above the cars in the distance. The shape of the object was oval and there were orange lights spinning around the edge of it. I could not see the object itself, only the lights which remained in the same position as they spun around the oval object, however the object was tumbling around in the sky. It was very strange and I’ve never seen anything like it. I watched it for two or three minutes while driving and at a stop light– until the road dipped down. When I went back up the hill the object was no longer there. The direction of the object was towards Lake Tapawingo. I saw a car on Ligget road that had its emergency flashing lights on where the location would have been good to see the object so there may be another witness. The size of the object was large – it was the width of the cars behind me but I could not tell the distance. There was no sound. I’m hoping someone else saw this and will report it. I’m quite shaken by the experience. NOTE: the above image is a rendering.

THANKS TO WWW.MUFON.COM CASE FILE.