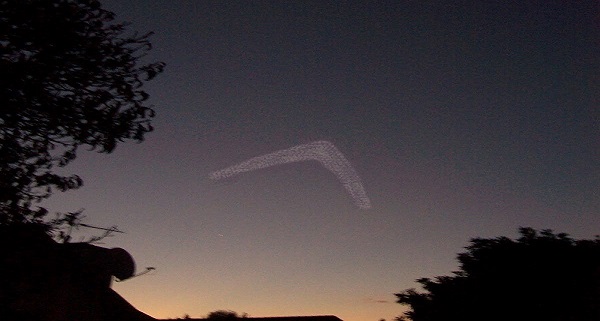 As I was coming home from a night class at the Univ. of Rhode Island, early April, 2008, about 9pm, up ahead at the intersection of Ministerial road (rt. 110) and Old Post Rd, in the Perryville section of South Kingstown, RI.  I saw a large (maybe 15 ft. across), round, off-white light hovering above a telephone pole (power transformer attached to pole). My immediate thought was ‘that’s not suppose to be there.’  I slowed down as I approached the intersection from the NW (Post Rd North) and stopped at the four-way stop sign, keeping my eyes on the light. There were no other cars on the road at that time.  The night was clear with stars and cool. I was fixated on the light as I crossed the intersection and stopped my car below the large light, trying to make out the shape of the craft, which I thought was either triangle or chevron shaped. I was a dense, dark object with only the lights prominent. There was no noise whatsoever as the craft just floated perfectly still above the pole. I then noticed a small ‘electric green’ flashing light, like a neon light, and a beautiful green color, at what I would call the rear of the craft. I estimated that the craft was about 30 ft. to 50 ft. in length. There were two homes on either side of the road where I stopped (noticed no one inside) and an automotive garage (Scott’s automotive) which is usually open nights ’till 11pm, next to the house across from the pole. I got out of my car, keeping my door open in case I needed to beat a hasty retreat for any reason, while I observed in fascination this craft. At that moment a car came out from a small dirt road/driveway next to Scott’s Automotive and I thought it would stop…instead, it accelerated past me and blew through the stop sign heading North on Old Post Rd…the driver must have seen the craft I was looking at and in fear sped away. I was alone again at that point, and as I watched the craft in slowly and ever-so smoothly pivoted, rose up a bit, and slowly drifted off across Ministerial Rd, heading NW, over a hill and toward the town of Wakefield. At that point I had this strange sensation that time was slowing down, even as I got back in my car to head home nearby. I called the South Kingstown police to report this incident as I drove. The female dispatcher took my call seriously and said no other calls had come in related to it at that point. As I drove away from the spot the feeling of slow time seemed to go away. I was too fascinated to be scared of what I saw but never felt threatened by the craft at all…just felt lucky to have such a fascinating observation.  NOTE: The above image is a rendering.