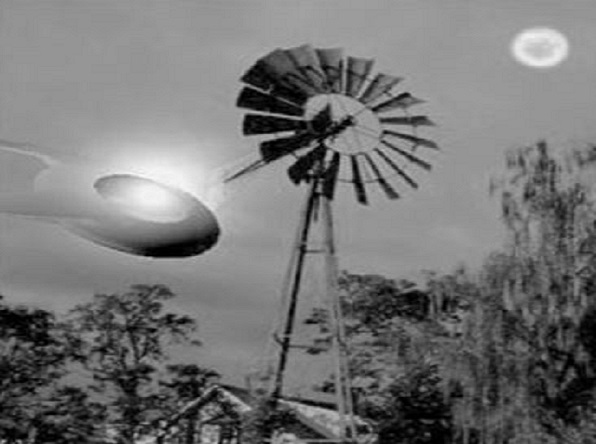 On April 17, 1897, a mysterious airship is said to have crashed in the town of Aurora, Texas…exploding into many small fragments. Reportedly, the occupant was child-sized and greenish, and the craft contained papers covered with hieroglyphics. The pilot’s body is supposed to be buried in the local cemetery.  Legend has it that residents of Aurora, TX, had their own alien encounter more than 100 years ago. Just north of Fort Worth, Aurora has a population of 376. Something about it is different…mysterious, and some say, down-right weird.  “It’s just a legend,” said Barbara Brammer, Aurora Historian.  April 19, 1897 would change this town’s identity forever.  “They said, ‘Have you heard of the Martian that crashed his aircraft into a well site in Aurora?,'” Brammer said. “And I said, ‘No.” A former mayor, Brammer first heard the story of the UFO crash shortly after her arrival in the 1950s. “I kept the legend going whenever I was teaching or when we had new people in to the community,” she said.  Legend has it that in 1897 a number of reports came in from across the country of a cigar-shaped flying machine. An article in the “Dallas Morning News” reported that the craft came crashing down in Aurora. Today, the “crash site” is an old well, sealed with concrete. “About noon, the fire had gone out enough that they could get in there and see what really happened,” Brammer said.

According to a report filed by an Army officer from nearby Fort Worth, in the crash debris was the body of the pilot said to be badly disfigured and ‘not of this world.’ “They scraped up all the stuff that they could find, brought it down here to the cemetery and gave him a Christian burial,” Brammer said.  The grave site remains today under a tree in the old section of the cemetery. “They eventually came down and put a marker on it,” Brammer said. “The marker has been gone for several years.” It was stolen, Brammer believes, by souvenir hunters. The cemetery has been designated a “Texas Historical” site for, among other things, the legend of the UFO pilot.  No one has ever been able to prove the story or rule it out. In the 1970s, The Texas Mutual UFO network asked to dig up the grave but was denied. “The cemetery board said, ‘You’re not going to touch that,'” Brammer said. Board members denied the request, she said, because they were worried Spotted Fever, which wiped out much of Aurora around the time of the incident, would rear its ugly head again.  In 2008, another group of UFO hunters used ground-penetrating radar and did find a mysterious, unmarked grave. But the grave was so deteriorated, the radar simply could not identify what was there. So, the alien mystery continues, and the legend of Aurora is the only real thing that remains.  “It’s a good story,” Brammer said. “It’s got to be a good story. It’s been around 112 years.”  NOTE: The above image is rendering.

21 thoughts on “CRASHED SHIP AND ALIEN BODY IN AURORA TEXAS”