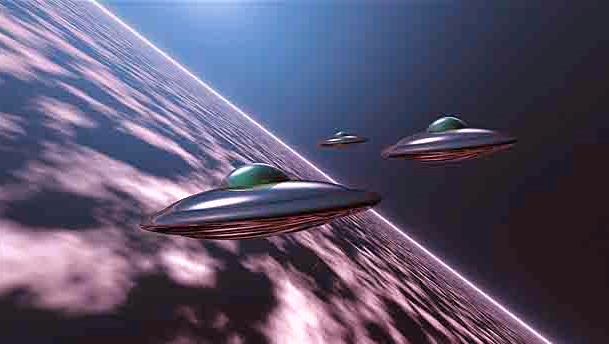 Edward J. Ruppelt, head of Project Blue Book, which looked into such matters, chalked it up as “one of the year’s most fascinating sightings.”  “The evening was clear, and visibility was unlimited,” he said.  The pilot and co-pilot of a Pan-American DC4, flying at 8,000 feet on the New York-Miami run, saw a glow in the sky, “that soon resolved itself into six fiery red objects, each of them about 100 feet in diameter,” according to Capt. William B. Nash. “The edges were well defined, not phosphorescent or fuzzy in the least.”  Ruppelt wrote, “their shape was clearly outlined and evidently circular. Nash and co-pilot, William Fortenberry watched in amazement.”  The six disks in a narrow echelon formation were joined by two more, all flying at about 2,000 feet over the Chesapeake Bay. When the disks were almost below the airliner, they dimmed slightly and flipped on edge in unison.  The edges seemed to be about 15 feet thick, and top surfaces appeared to be flat.  After being interrogated by the U.S. Air Force, the two pilots were told the disks had been observed by seven other groups. Project Blue Book checked the positions of all known military and civilian aircraft in the area, finding nothing that would account for the sighting, which went into the official ‘unexplained’ category.  The Air Force, which has constantly fibbed about UFOs, and/or put down those who sighted the “unusual” up there, published a conclusion by author Donald Menzel, who concluded the pilots were fooled by fireflies (honest) trapped by the double panes in the cockpit window (snicker-snicker).  Obviously, many reported sightings were ‘mistakes’ or ‘phonies’ but there are too many that cannot be explained away. Heck, there are billions of stars out there, so it seems ridiculous to conclude we are the only ones with life. And, of course there are probably life forms far different from ours, acclimated to wherever they exist.  A major story concerns the alleged crash of a flying saucer near Roswell, N.M. Bodies were supposedly found inside the craft. Here is where we return to our state: Charles Berlitz and William Moore thoroughly researched the subject and, in a book they penned, noted, “the carefully preserved bodies remained stored (as of the ‘90s) in a CIA warehouse in Langley.”  NOTE: The above image is a rendering.