These six men were on a training/test exercise in an RB-47H electronic countermeasures reconnaissance aircraft. The RB-47, while originally developed as a bomber, was also used extensively as a reconnaissance aircraft. One was shot down by the Soviet Union while on such a mission in 1960.  This particular mission began at Forbes AFB in Topeka, Kansas as an exercise including gunnery exercises over the Texas-Gulf area, navigation exercises over the open Gulf, and Electronic CounterMeasures exercises on the return trip across the south-central U.S.  The men participating were soon to depart for Germany and duty there. It should be noted that the ECM equipment was not radar. It did not emit a signal and then pick up reflected echoes off of an object. Rather, it detected electromagnetic signals that were actually emitted by an object itself. The purpose of this was to detect and locate enemy radar installations. On this aircraft, the #2 monitor consisted of a direction finder with antenna on the lower rear of the aircraft, and the #1 monitor consisted of a direction finder with antennas on each wingtip of the aircraft. The #3 monitor was not involved in the events of July 17, because its range did not include the frequencies involved. The first contact with the unknown object was before 4:00 AM CST. The first two parts of the mission had been completed, and the aircraft was just leaving the airspace over the Gulf of Mexico near Gulfport, Mississippi, when Frank McClure, on the #2 ECM monitor, detected an airborne signal to the right rear of the aircraft, out over the Gulf of Mexico. The signal was of a type usually confined to ground-based radar installations. It was at 2800 megacycles, a common frequency for S-band search radar. McClure at first thought that his scope must be 180° out of alignment and that he must be picking up a ground-based radar station in Louisiana, which would actually be to the left front of the aircraft. As he watched, the signal moved up the scope, as it would if the scope was 180° out of alignment. However, he was amazed to see that, after it had moved up the scope on the right-hand side of the aircraft, it then crossed the path of the RB-47 and proceeded to move down the scope on the left-hand side. In other words, whatever was emitting the signal flew a ring around the RB-47, which was flying at approximately 500 mph. Even if the scope was 180° out of alignment, the signal source still moved completely around the aircraft, which no ground radar could do. McClure said and did nothing at this time, not mentioning the signal to the other crew members. The signal faded as they flew north. 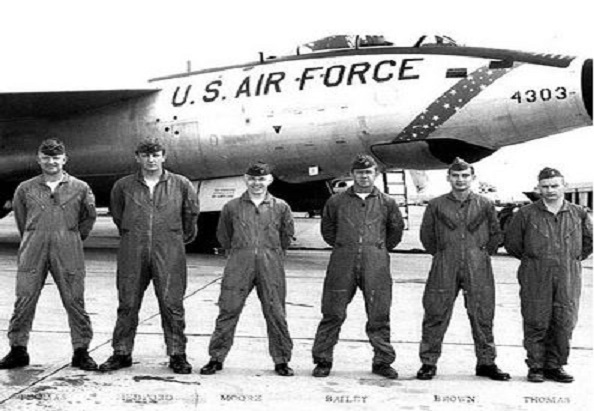 The RB-47 made a scheduled turn to the west over Jackson, Mississippi and the crew was preparing to begin a series of simulated ECM operations against Air Force ground radar units, when suddenly the pilot, Lewis Chase, saw a light coming in from the left, at approximately the same altitude as the RB-47. At first he thought it was another plane, but it was only a single white light, closing fast. He gave the command to prepare for evasive maneuvers, but the light flashed across from left to right so fast that no such action could have been taken. It then blinked out at a point to the right front of the aircraft. Both Chase and Copilot James McCoid observed this. At this point, approximately 4:10 AM CST, they were approximately over Winnsboro, Louisiana.  Chase told the other crewmembers what he had seen, and McClure now told him about his earlier signal reading. At 4:30 AM, McClure set his scope to detect signals near 3000 mcs again, and he detected a strong signal at the same location in relation to the RB-47 that Chase had last seen the light. He and Provenzano checked the alignment of the #2 monitor by tuning in on known ground radar installations and found it to be in perfect working order. At 4:30 AM, Provenzano tuned his own monitor, #1, to 3000 mcs, and found that his equipment detected a signal at the same location. What’s more, he and McClure found that the signal was staying in the same position, keeping pace with the RB-47, which was still flying at 500 mph. This meant that it was not a signal from a ground-based radar.

By this time they had reached the Duncanville, Texas area. At 4:39, Chase spotted a huge light to the right front of the RB-47 an about 5,000 feet below the aircraft’s 34,500 feet altitude. The weather was perfectly clear. At 4:40, McClure reported two signals, at 40° and 70°. Chase and McCoid reported seeing red lights at those locations. Chase contacted radar Station Utah at Duncanville, Texas and requested permission to abandon his flight plan and pursue the lights, which he received. At 4:48 AM, radar station Utah requested the position of the signals that McClure was receiving, and they immediately confirmed that their radar had detected the objects at the same location. As the RB-47 attempted to pursue, the object appeared to stop suddenly. Chase could see that they were gaining on it, and they over shot it.  At 4:52 it blinked out, and simultaneously vanished from McClure’s scope and the ground radar! Chase put the aircraft into a port turn, and the object suddenly blinked on again, simultaneously reappearing on McClure’s scope and the ground radar at 4:52! They began to close to within 5 miles of the object, when it suddenly dropped to 15,000 feet and then blinked out again, once again vanishing from the scopes and ground radar. At 4:55, Chase radioed Utah radar station that they had to break of pursuit and continue with their scheduled flight plan due to low fuel. At 4:57 McClure picked up the signal again, and at 4:58 Chase made visual contact again. As they headed into Oklahoma, McClure continued to receive a signal, now from the rear of the aircraft, until it finally faded as they neared Oklahoma City. The Director of Intelligence, 55th Strategic Reconnaissance Wing, stated in his report that he had: …no doubt the electronic D/F’s coincided exactly with visual observations by aircraft cmdr numerous times, thus indicating positively the object being the signal source. NOTE: The above image is a rendering.