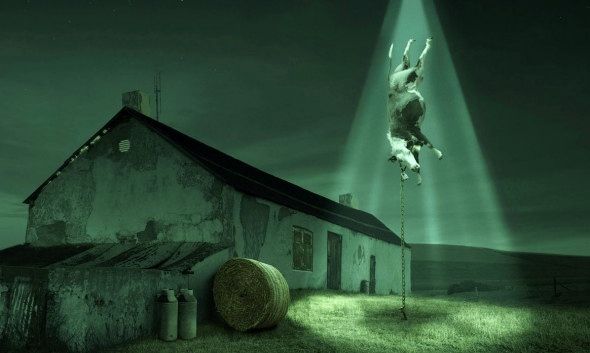 A disturbing chain of livestock mutilations has plagued farmers and ranchers throughout all 50 states for decades, but law enforcement has failed to name a perpetrator. Cows, horses, goats, and other livestock have been randomly found dead—the corpses mutilated and organs removed with surgical precision. With each of these attacks, no tracks of any kind surround the site, perplexing ranchers and law enforcement.  Many theories surround this mysterious and persistent wave of attacks. Suspects include predatory animals, satanic cultists, extraterrestrials, and even the U.S. government. To this day, no arrests have been made even though more than 10,000 attacks have been recorded throughout the country, according to KLAS-TV Las Vegas.  These cases stand out from regular predatory attacks on livestock. Their surgical nature is eerie and unexplainable. Colorado rancher Tom Miller recalled his first encounter with the mysterious mutilations: The eyes, ears, tongue, and reproductive organs had been removed from one of his cows with surgical precision. No blood was found onsite, which is typical among the mutilation attacks. Miller said that his cattle have been periodically attacked in this way since 1999.  Adding to the bewilderment are the fractured bones, including ribs, inside the carcasses of the mutilated animals, suggesting that the animals were taken, operated on, and then dropped from an elevated height.  Supporters of the extraterrestrial theory suggest that aliens take the animals aboard their craft and then discard the remains, according to the “Unexplained Files.” Ufologists—those who study UFOs—believe that the mutilation of these animals represents a need for bodily tissue in order to create alien-human hybrids. This claim is perhaps lacking in evidence, but in many cases of cattle mutilation, the reproductive organs were removed—embryos included. In the scientific community, cow embryos were used in human cloning attempts by the company Advanced Cell Technology in 1999, reported the BBC and NewScientist news.

NOTE:  MUFON has a new show that is aired on Friday nights and it’s called ” Hanger 1 ”.  The last episode touched on this interesting subject and made it very clear that livestock are disappearing and some are being dissected for it’s organs.  I have always been a big critic of these so called UFO shows but this one is excellent.  MUFON has hit a grand slam with this one.  …..The above image is a rendering.