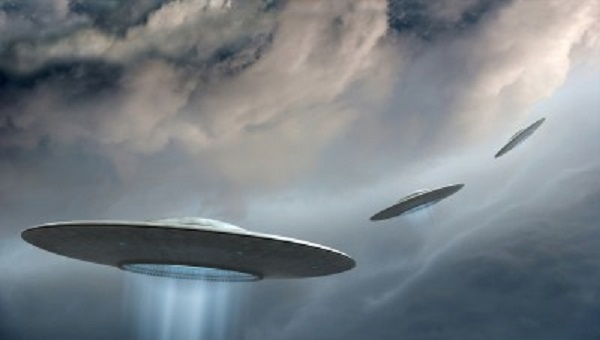 What I saw that morning were two very visible flying saucers. I noticed the first one coming from the west and heading east. Then I noticed a second one coming from the south. When they started getting closer looking like they were going to hook up or something.  The first one heading east making a complete stop.  When the second one which was heading south, reached the first one, it made a turn to head east.  It was very cold out that morning and I didn’t have very much on to stay out much longer.  I think I was standing out there for about 10 minutes. Neither one was moving at a fast speed but because the sky was rather bright that night, I had no problem in getting a good view of both of them. So after that incident, I made it a habit to look up at the night sky every night and what I have been seeing is something that I have no idea of what they are.  This is every night when the sky is clear enough to see them and there are anywhere from five to thirteen of them that I can see.  Because I have mentioned this, more and more people are coming forward and saying that they are seeing these strange things every night also. I don’t know if you would be interested to follow up on this. I have so much more to tell that would take up too much space here but all kinds of crazy stuff has been going on. Everyone that I have talked to don’t know if these things are from another planet, or if they are from our own government. I hope that I will be able to talk to one of your staff to fill them in on all the details.  NOTE: The above image is a rendering.