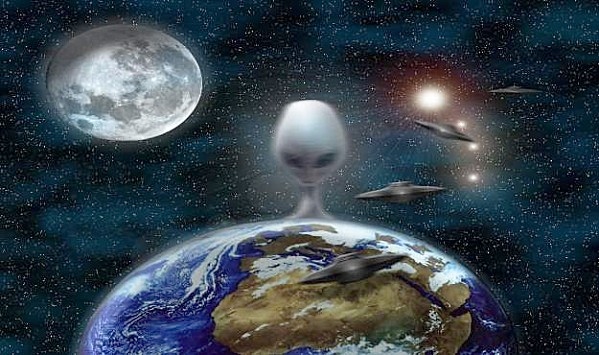 Myself and my wife had decided to go and clean the fields for sweet potatoes and upon loading the car and heading back home, which was about a mile from home, right in the clear blue sky on the right appeared this huge craft in the sky. Dark brown in color with windows going all around it, there was one woman standing in front of one of the windows as it hovered about a good two hundred feet above the trees, as we were riding in our car. I asked my wife do you see that and she said yes. It was so huge and magnificent. I never seen anything on this planet like it before as it hovered over the trees not making a sound and no wind was stirring at all from this huge craft. The tops of the trees didn’t move at all, as I sped up to get a better view of the huge craft, I had some trees that blocked our view for maybe 5 seconds as we was clearing the trees with great anticipation to get a better view the huge craft had vanished without a trace. We are a christian family with strong christian values and when I tell my story of what we saw people really don’t believe but I know what I saw and my wife knows what she saw and she doesn’t like to talk about it and seems like she’s a little different since it happened but we know what we saw. I’ve been searching the web to try and see something that looks similar. I feel that more time had passed than what we could remember but I’m not sure. It didn’t dawn on me to look at my watch for the time we were so in awe, but at times. I feel more had taken place than what I can remember. After we had encountered it, I just remembered being tired and going to bed early that night. We told some family about it but not much was said or done since.  In school I used to be a fairly good artist but now I just can’t seem to even draw what we saw on paper. NOTE: The above image is a rendering.