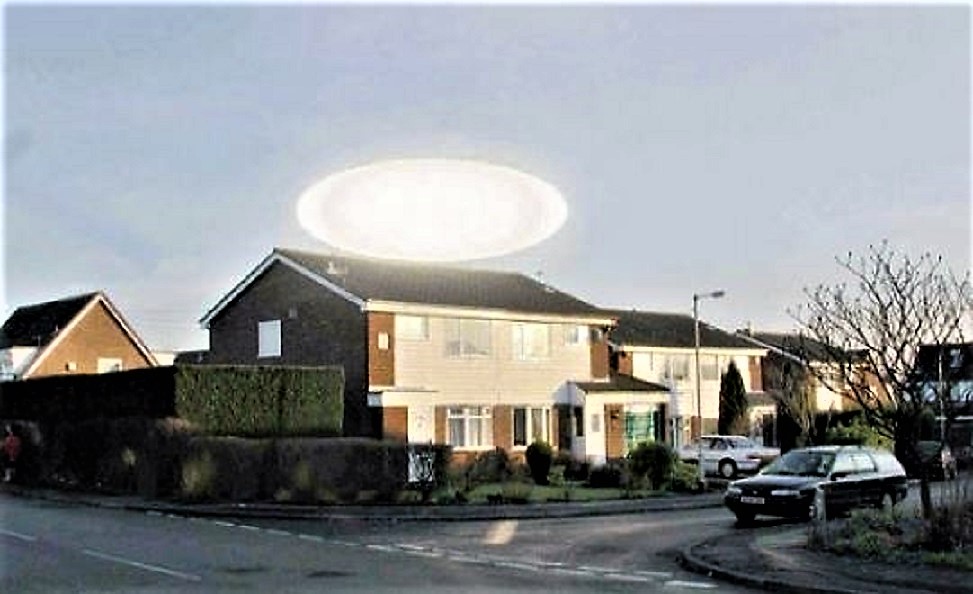 JANUARY 4, 2001 …….BOLTON MACHESTER ENGLAND
Sighting Time: 12:00
Day/Night: Daytime
Duration: 2 minutes
No. of Witnesses: 2
Appearance / Description of Object(s)
Bright white large oval object. there were no observable markings or anything else visible on the outside of it.
Description of Area / Surroundings
Urban area with no military bases in the area or anything else I would consider as being significant.
Full Description & Details
Whilst travelling home in my car with my wife when I saw a very bright oval shaped object rise up from behind a house. Although it was very bright it did not hurt your eyes to look at it. The object was slowly rising steadily above a house in the street. I stopped my car to observe it the object then started to move off to the right with its speed increasing. The object then moved to the right at an estimated speed of about 20 miles per hour. It then abruptly change course by about 80 degrees and was then obscured by other houses. I restarted my car and chased after it down the side street and at this time it was out of my vision. When it got to a position in the side street where I would have expected it to have been it was gone.
Although I was with my wife at the time, a serving police officer, and we both agree that we saw it. It is disturbing to me that we both seem to have a different recollection of when and where we were when we both observed it, a difference in time of apparently only a few hours. I believe we saw it at about 12 noon however my wife believes she observed it with me later in that afternoon at about 1600 hours and in a different location. A few days later I decided to go and photograph the same location where I believe I had observed it and with the aid of photoshop I was able to recreate a copy of what I believe we saw.
Personal Background:
I am now retired I have a background in the first instance of engineering and latterly of being the person in charge of a small housing association. I am interested in electronics and am also a radio amateur. I have a reasonable education.
Views on UFOs, before and after sighting:
Before this incident I had an open mind about UFO’s but was sceptical
Other Comments:
I have not reported this sighting before because I was then a working person with a responsible job and I didn’t want to be ridiculed. I am now retired so it doesn’t matter so much. My wife though is still a serving officer
THANKS TO WWW.UFOSIGHTINGSDAILY.COM
KEN PFEIFER WORLD UFO PHOTOS AND NEWS
WWW.WORLDUFOPHOTOS.ORG
WWW.WORLDUFOPHOTOSANDNEWS.ORG
WWW.KENPFEIFERDISCOVERIES.COM