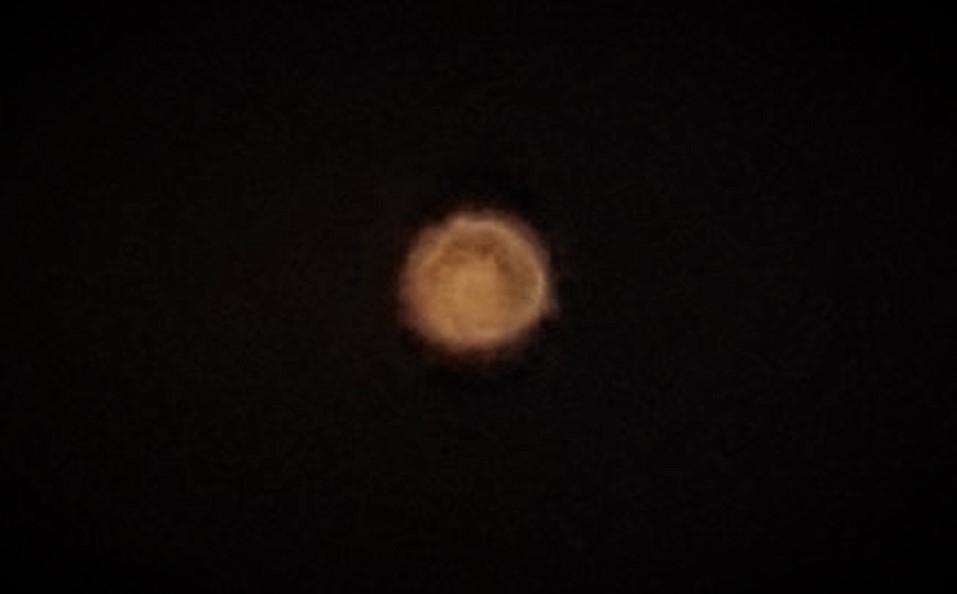 I see UFOs frequently in the northeast/eastern sky above the treeline, any time from late afternoon to late evening, and I have for a few years, increasingly so. They vary in size, shape, color, and behavior. During this particular sighting, my family and I had just arrived home from a family celebration. The family went inside, and as my husband entered the house, I told him, “Look, it’s one of my UFOs!” He acknowledged and looked up, as he is very used to seeing them when I point them out, but does not enjoy watching them or pondering about it. The object was glowing/pulsating a yellow/orange light. It appeared slightly larger than the largest star in the sky. It seemed to stretch around the edges, as stars sometimes appear to do with atmospheric interference, but more so. The flight path was wobbly (up and down a bit) in a south/southeast direction. When I began watching it, it’s behavior changed. It hovered above the treeline while I got a photo, mostly stationary, but with a bit of a circular movement. The sky was very very clear, with many stars visible, yet the object was the only light visible on camera. I filmed it for a few minutes, but got cold and decided to come inside. When I came in, I checked on the object through the back French doors, and when I looked at it, it began moving again in the south/southeast direction. I quit watching it then. I have become fairly used to seeing UFOs from about that far away. They don’t stir me a bunch anymore. Only when they get closer do I become very concerned. I would report previous experiences, but I don’t have dates available, nor any photos from these encounters.