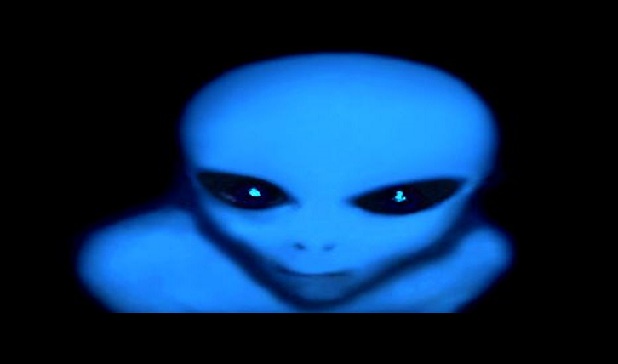 VERY STRANGE ALIEN ENCOUNTER IN GEORGIA
SEPTEMBER 15, 1994  …….   ATLANTA GEORGIA
I was having a really hard time and had become very depressed for an extended period of time. Fell asleep this night and was woken because my arm was hanging over side of bed and something was “stroking my hand”. I awoke and thought it was odd my cat would be awake and rubbing up against my hand at this time of night. I turned my head and this “thing” with huge blue eyes was so close to my face that I could feel her nose touching mine. I was TERRIFIED. I whipped my hand out of hers and sat straight up in bed and screamed at her “WHAT DO YOU WANT!’ Within seconds she glided up from her lying down position (she had been laying long wise with her legs straight out and her head propped on her bent “elbow”. And she just kind of “glided” her whole body up to a standing position. She looked at me the whole time but then turned and started “walking away” – although her “feet” never touched the ground – she was like walking / hovering about an inch above the ground. But as she started leaving, I realized I wasn’t scared at all and actually felt a warm “love-like” feeling. And I truly couldn’t believe this “thing” was not going to say or do anything but leave. It kind of baffled me so I said “WAIT! Why are you here?!” She stopped at the foot of my bed and turned to look right at me.This is when I was really able to evaluate her – she had long skinny legs, long skinny arms, long skinning fingers / hands, skinny body and although she had no defining “parts” somehow I had this clear sense that it was “female”.  I don’t know why; HUGE eyes (they had a big blue iris)and a tiny tiny little pointy nose – she did “look” like the form of pictures of aliens I have seen BUT her head was normal sized and she was this absolutely beautiful glowing blue color – Like the color of those little lights at the airport but more clear? pure? not sure how to describe it. This blue glow reflected onto the wall on the side she was closest too and the ceiling above her, but not in front of her or onto my bed. But the glow felt “warm”.
The other thing that really stood out to me as I thought about it was that this “being” didnt seem to be “highly intelligent” as I had always heard and assumed. When I looked into her eyes it was as if I was looking into the eyes of a big golden lab – not stupid but not super intelligent – more like looking into the eyes of a loving, loyal dog]  Now as I asked her this question, she stared at me and didn’t talk, but I could “hear” everything she was saying in my head but she didn’t say much. She just looked at me with these big beautiful eyes and said “Sorry, gotta go!”, and she turned and hover-walked down the hall. I remember I could see the blue glow reflecting onto the sides of the hall as she walked down it – and then she turned to the left, which was really odd (I had two doors to the outside – one to the right that went out to the front, which is the way everyone came and left and one to the back, which went to a little excluded back yard that no one ever used – she turned to the door to the left out to the backyard – I saw her walk to it and then poof! she was gone and so was the blue light and the warmth (this was a basement apartment) I never heard a door open or close so it was like she just walked through it.  As I sat there stunned, I looked around to see my cat still curled in a ball sound asleep – she had never woken. I thought to my self – was I dreaming? and decided to pinch myself in the arm – and it hurt and then my pet cat, woke briefly and then put her head down like she was exhausted. I just couldn’t stop staring at the door / area where the Blue Lady had left – I almost expected her to come back but she never did.  NOTE: The above image is a rendering.
KEN PFEIFER WORLD UFO PHOTOS AND NEWS
WWW.WORLDUFOPHOTOSANDNEWS.ORG
WWW.WORLDUFOPHOTOS.ORG
THANKS TO WWW.MUFON.COM AND
WWW.PHANTOMSANDMONSTERS.COM FOR PUBLICATION.