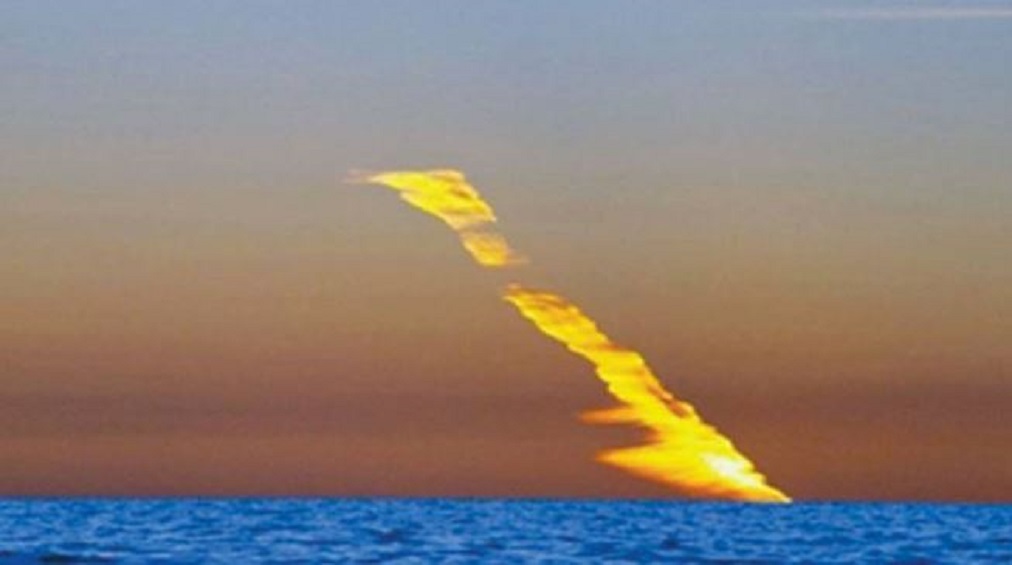 POSSIBLE ALIEN CRAFT CRASHED INTO THE OCEAN
.
AUGUST 1999 ………..GOLD COAST QUEENSLAND AUSTRALIA
.
Over the last two and a half months, I have experienced two sightings on the gold coast and would like to communicate with others either here or elsewhere who may have seen the same thing.  The first sighting occured about two and a half months at about 10.15pm on a sunday night. I was on my front patio grabbing some fresh air, which faces an easterley direction, when a bright orange light caught my attention, coming out of the south. It appeared to be travelling at about 200-250 km’s an hr., at an elevation of approx 3000-4000 ft.  At first I thought it was an aircraft on fire, but as it got closer it appeared to be a round shape, with no discernible fueslage, no cabin lights, no nav lights, no rotors of any kind, and the colour was an incredibly bright orange, so bright in fact, that it reflected off the cloud bank directly behind it. Also I must stress that there was no sound whatsover from the ‘craft’ and also that it was a very quiet night with no wind. The area I live in is a very quiet residential suburb. It continued in a northerly direction until it became obvious that it was slowing down and in fact, it came to a complete stop. There was no hovering or sideways motion at this point as a helicopter might do, it stopped at a precise point and stayed there for about four or five minutes before it slowly took off again in a northerly direction and eventually disappeared.
.
The second sighting occurred about three weeks ago. I was sitting in my lounge room watching t.v. when I happened to look out my window, which faces a northerley direction, and coming out of the northern sky was an incredibly bright light, travellin at a speed a lot faster than the original object and a lot brighter.  I called out to my wife, ‘it’s back again’, and we both ran out onto the front porch as the object came closer. as we both watched, the object slowed down and came to a complete stop in the sky, at a point very close to where the first object had stopped. the object seemed to be a lot closer than the first sighting, and again , the light was incredibly bright, this time however, it actually appeared to be a type of flame and actually appeared to be moving around the craft as a flame might move around in a light wind.  Unfortunately it came to a stop in such a position that a tree in my front yard stopped me getting a photograph of it. Again, it stopped for about four minutes, and waiting for it to move again, camera at the ready, we both observed it start to move very slowly, but unfortunately in a northerly direction. by the time I ran downstairs and out into the street, the object had dimmed greatly and even though I took a photo I doubt it would reveal anything.  As we both watched it move off into the northern sky, we were both amazed to see something fall off the craft, or possibly thrown out, which fell to earth at terminal speed and definitely appeared to be on fire. There were definitely flames and apparent burning debris coming from the falling object, and kept burning until it got closer to the surface, when it appeared to be extinguished. It definitely would have been over open ocean by this stage, somewhere north of Surfer’s and possibly near North Stradbroke or Moreton island.  NOTE:  The above image is CGI.
.
KEN PFEIFER WORLD UFO PHOTOS AND NEWS
HTTP://WWW.WORLDUFOPHOTOSANDNEWS.ORG
HTTP://WWW.WORLDUFOPHOTOS.ORG
HTTP://WWW.HEAVENSRANGERS.NET
HTTP://WWW.NEWDISCOVERIES51.YOLASITE.COM
THANKS TO http://www.auforn.com/
.