Of all the reports of UFO sightings, some of the most intriguing ones are those which come in flaps, or waves, have multiple witnesses, and photographs.

One of the most celebrated cases of this type was the Belgian flap which began in November of 1989.

The events of November 29 would be documented by no less than thirty different groups of witnesses, and three separate groups of police officers. All of the reports described a large object flying at low altitude. The craft was of a flat, triangular shape, with lights underneath.

This giant craft made not a sound as it slowly and fearlessly moved across the landscape of Belgium. There was free sharing of information as the Belgian populace tracked this craft as it moved from the town of Liege to the border of the Netherlands and Germany.

This first startling sighting would evolve into a wave over the next several months. On two occasions, a pair of F-16 fighters chased the mysterious object, but to no avail.

On March 30, 1990, a frantic call to military headquarters came from a Belgian national police Captain.

He marveled at a giant triangle passing over and simultaneously two ground radar stations were reporting an object of unknown origin on their screens.

One of these bases was NATO controlled near the city of Glons, southeast of Brussels.

After contacting other radar facilities, they learned that at least four other stations were also reporting the object on their screens. The object was moving across their screens slowly, and failed to send a transponder signal to identify itself.

Two F-16s were ordered to intercept and identify this phenomenon, and one of the jet’s radars locked the object in. It appeared as a small diamond on the pilot’s screen.

The pilot reported that only a few seconds after locking on the target, the object began to pick up speed, quickly moving out of radar range.

An hour long chase ensued, during which time the F-16s picked up the strange craft’s signal two additional times, only to see it fade from view.

The triangular craft seemed to be playing a cat and mouse game, and finally was lost in the night lights of Brussels.

The pilots of the fighters reported that the UFO had made maneuvers at speeds beyond the capability of their technology, and once the radar showed the craft drop from 10,000 to 500 feet in 5 seconds!

The extraordinary sightings continued for months as the triangular invader was witnessed more than 1,000 times, both day and night. The object dipped low enough to easily be seen with the naked eye, and the event became one of the biggest stories in the Belgian media.

Another unusual occurrence associated with the Belgian flap was the inability to take a clear photograph of it. Many observers had their cameras ready, and took what they thought would be clear images, but when the film was developed, the image was blurred, and the craft’s outline was vague at best.

This anomaly was addressed by physics professor Auguste Meessen, who was employed by the Catholic University at Louvin. Meessen’s investigation produced a theory that infrared light must be the reason that almost all the images were unclear. To put his theory to test, he exposed film to infrared, then photographed objects in regular light. The results were the same as the photographs of the triangle-shaped UFO.

One good image was finally captured on video tape in April 1990. This image showed the underbelly of the craft with spotlights on the three corners. A still frame from this tape has been seen worldwide, and is a classic UFO photograph.

The Belgium wave has obtained classic status in UFO lore. With over 1,000 witnesses, confirmed radar sightings, plane radar lock-ins, and military confirmations, the fact that an unknown craft moved across the country of Belgium cannot be denied.

The case is also important for its unique information sharing. Civilian and Military officials were forthcoming with the reports, and set a model for others to follow in their pursuit to uncover the mystery behind the UFO enigma. 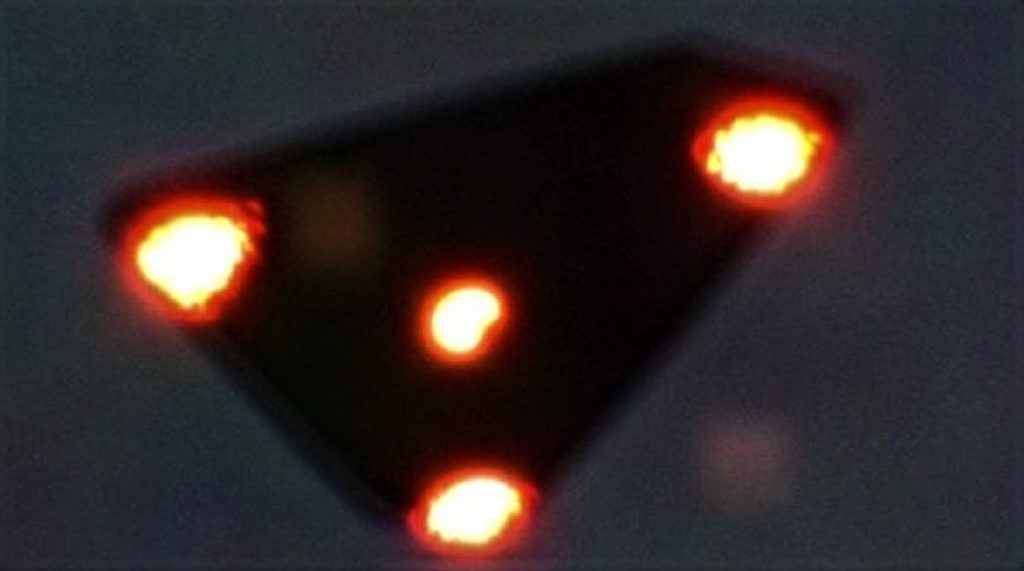 Date of sighting: October 1989
Location of sighting: Belgium
From October 1989 throughout 1990, hundreds of reports of lighted objects, frequently described as enormous and triangular in shape were recorded in Belgium. Air Force supersonic F-16 jets chased these strange objects, which were simultaneously tracked by both airborne and ground radars. The Belgian Government cooperated fully with civilian UFO investigators, an action without precedent in the history of government involvement in this field.  The Chief of Operations of the Royal Belgian Air Force, Colonel Wilfred De Brouwer (now Major General and Deputy Chief of the Belgian Air Force), set up a Special Task Force Unit to work closely with the Gendarmerie to investigate the sightings as soon as they were reported. Among the thousands of witnesses were many military and police officers, pilots, scientists and engineers. The wave was documented by the Belgian Society for the Study of Space Phenomena (SOBEPS), a private organization from Brussels, which published two thick volumes on the UFO wave.
The first important case was a multiple-witness observation of a strange aircraft, reported by gendarmes on patrol near the town of Eupen, not far from the German border. Auguste Meessen, professor of physics at the Catholic University in Louvain and a scientific consultant of SOBEPS, summarized the case:  “On November 29, 1989, a large craft with triangular shape flew over the town of Eupen. The gendarmes von Montigny and Nicol found it near the road linking Aix-la-Chapelle and Eupen. It was stationary in the air, above a field which it illuminated with three powerful beams. The beams emanated from large circular surfaces near the triangle’s corners. In the center of the dark and flat understructure there was some kind of ‘red gyrating beacon.’ The object did not make any noise. When it began to move, the gendarmes headed towards a small road in the area over which they expected the object to fly. Instead, it made a half-turn and continued slowly in the direction of Eupen, following the road at low altitude. It was seen by different witnesses as it flew above houses and near City Hall.” Sightings continued to be logged by SOBEPS and the Gendarmerie during the fall and winter of 1989-1990. Most witnesses described seeing dark, triangular objects with white lights at the corners and a red flashing light in the middle. Many of the objects were said to have hovered, with some of them then suddenly accelerating to a very high speed. Most of the objects made no sound, but some were said to have emitted a faint humming like an electric motor.
KEN PFEIFER WORLD UFO PHOTOS AND NEWS
HTTP://WWW.WORLDUFOPHOTOSANDNEWS.ORG
HTTP://WWW.WORLDUFOPHOTOS.ORG
HTTP://WWW.KENPFEIFERDISCOVERIES.COM
HTTP://WWW.UFOSIGHTINGSDAILY.COM