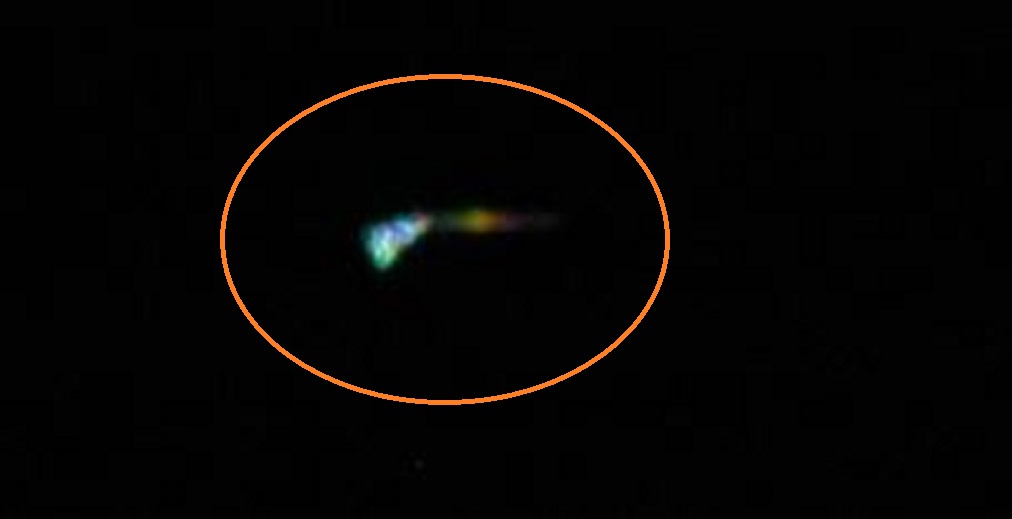 Was driving home from work at about 8:00 pm turned onto highway 15 at Carleton Place and started south I noticed the object within seconds of making the turn. It was just off to the left and above me. I could see it clearly looking up at the top left corner of the windshield. What was strange was that I was trying to identify it as something familiar and explainable I was thinking helicopter at first but could not fit the shape of what I was seeing with anything that I had seen before. As I drove into the countryside the light pollution diminished and it became much easier to see. It was very large and moved very slowly I was travelling at about fifty to sixty miles an hour and did not seem to be falling much behind it. For the most part I was behind it. The surface of It appeared darker than the night it had what looked like four blue flames coming from each of the rear corners there was a fair separation between the flames. There was a large glowing light in the middle of it which made it difficult at first to determine what the true shape of it was. I was thinking at first it might have been a diamond shape but after watching it for a while I can say with certainty that it was triangular. The illumination of the central light was not that bright but was visible there looked to be a glowing band of orange or red lights that followed the contour of the sides. None of the illumination was strobing and it was constant more like a series of lights or an glow showing up through a series of vents along the sides.

I kept it in sight for the entire trip home from Carleton Place to Smihs Falls when I turned west at the junction of hwy 15 and Roger Stevens Rd. It remained visible as I drove down the main street it slowly made a westerly turn no banking just a change of direction. I kept it in sight as I came to a stop light on Beckwith Street. There was no traffic other than myself on the main street when the stop light changed and I started off I noticed a young guy walking on the side walk I came to a stop rolled down my window and got his attention. The object was clearly visible and still fairly low so I wanted to draw it to his attention, I said take a look to your left and up what do you make of that he said what the expletive is that thing, I told him I had been following it for about a half an hour. In all honest I wanted to make sure that I was really seeing this and it gave me great comfort to know that he could see it as well. I continued down Brockville street and it remained in sight I drove out of town and turned onto my road hoping that it would stay visible long enough to grab a camera and try and get a picture. I had tried to use my phone to get a shot of it but didnt think it would get anything given that it was in the distance and pitch black outside and I was driving down the road at 60 miles and hour. I pulled into my driveway and hurried inside and got my wife and daughter to come out and take a look just so that I would have witnesses and that they would not think I was nuts. I also told my daughter to grab my camera so that I could take some pictures. I took some pics and some video the video was crap because it was to far away to focus, a couple of the pics came out but they are very far away telephoto shots.

A large UFO and a number of small ones were reported in Long Island, New York near the Brookhaven National Laboratory. That’s the Department of Energy Lab originally set up by the Atomic Energy Commission for peacetime nuclear research. It’s also the place where the wreckage of an alien spacecraft that crashed in Long Island was rumored to be taken for storage and research. Could aliens have finally come back for their ship?  An anonymous witness from Long Island reported seeing a large cigar-shaped UFO on November 23, 2015, at around 6:45 pm. He said the silent UFO had a light at each end, changed altitude and speed quickly and hovered in one spot for over an hour. That spot was over Brookhaven National Laboratory – more on that later. It was also where the large UFO was circled by 4 or 5 smaller UFOs that all eventually disappeared. The witness claimed that he had seen UFOs often in this area and believed it has something to do with the lab.

That “something” might be a crashed UFO. According to reports from that time, on November 24, 1992, Walter Knowles saw a UFO near the vicinity of the lab at 7 pm. He stopped his car and watched the tube-shaped UFO with lights at either end along with a number of other motorists. They saw the object fly erratically and crash; then they watched a beam of white light shoot into the sky. The light was reportedly seen by residents in the area, along with what appeared to be the glow of a fire. There were also reports of telephone and cable TV outages, household appliances malfunctioning and car batteries draining.  Knowles claimed he went to the crash site but was turned away, along with local police officers, by men in black jumpsuits. He and others said they saw large objects being taken out of the area on military flatbed trucks to Brookhaven National Laboratory. A video from that time allegedly showed what appear to be bodies or body parts being taken there as well.

The story of the UFO, wreckage and alien bodies has long been dismissed by the lab. The usual explanation is that the lab had the closest firefighting team and equipment and that’s why trucks and personnel were seen traveling to and from the fire.  Is this why UFOs seem to be attracted to the Brookhaven National Laboratory? Or could it be because of accidents, like the 1994 fire in the high-beam flux reactor or the 1997 leak of tritium into local groundwater? UFOs are frequently seen at nuclear sites that have had problems.  As of this writing, there has been no official comment on the latest sighting. The witness is a longtime resident who says it was not a plane from the nearby airport.  Did aliens come back to the Brookhaven lab for their compatriots?

KENS NOTE: I was just informed by a facebook friend and Ufologist that there is additional information on the sightings she has had recently.  She lives close to the Brookhaven Laboratory in Long Island. Mysterious lights and a stationary UFO that makes an appearance every few days makes her even more curious as to what it could be.  She will keep in informed as the days go by.