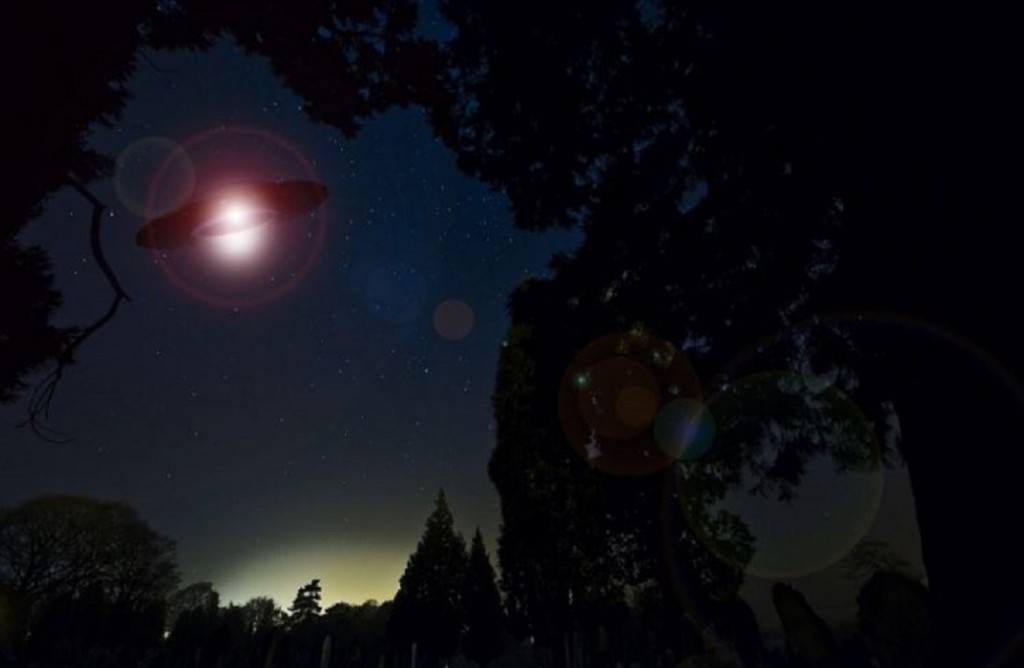 Superstition Hill UFO Sighting. Summer 1997. I went camping off of Old Kane Springs Road, Borrego Springs, California, just south of Highway 78, and north of El Centro in the Anza Borrego Desert BLM lands. Arriving just before sundown to meet up with a friend who had arrived earlier in the day.  My friend carried on and on about unmarked gun metal blue jets flying very low passes at very high speed over the area since early afternoon. I did notice jets flying upon arrival but it wasn’t surprising since I knew the Navy’s proving grounds (mysteriously called Superstition Hills) was just a mile or so southeast of our campsite. You could see the chalky white hills slightly poking up from the desert floor with commercial air traffic from El Centro Airport in the background.  After setting up my tent and popping a beer we enjoyed talking and watching the full moon rise from the southwest as El Centro’s plane traffic was visible to the southeast. Within 15 minutes of sundown, out of the blue, two gun metal blue F18s whizzed over us at extremely high speed and extremely low–lower than I’ve ever seen. And they came around again, criss-crossing each other in the skies at least three more times. My friend went bonkers, proclaiming he wasn’t a liar and I couldn’t argue with him. This was amazing and I ran to get my binoculars.  With binoculars readily in hand I chased them around the sky as my friend frantically searched for his pair. At one point, the two jets lined up together side-by-side very low bearing southwest towards the direction of Table Mountain easily zooming directly overhead at over 400 mph. On approach, they split up and disappeared over the first set foothills. My friend was still searching for his specs as I watched, totally stunned, as a large glowing presence rising from them where the planes disappeared. I had no idea what I was witnessing as the entire side of Table Mountain lit up and then I freaked – small red orbs started to manifest below the whitish glow.  As the glow grew brighter these red orbs crested the mountain in formation of a huge clock. The lights continued to rise together in a fixed circular formation until an entire ‘clock’ formation was visible. In the middle of the clock of red lights, a nebulous blob glowed brightly when all of a sudden, two smaller red lights at 4 and 7 split away and flew off in opposite directions at enormous speed, disappearing over and around Table Mountain. I surmised they were the jets I had just seen, but it was hard to tell. The shimmering red orb clock formation then rose up over the crest entirely in view and disappeared over another ridge and the lights dimmed into darkness. The hillsides went back to normal moon lit desert and I was screaming aloud that this was the wildest thing I have ever witnessed. But then it got wilder.

The strange giant ‘clock lights’ had appeared and then disappeared into the mountain landscape in less than a minute – all occurring as my friend finally found his binoculars in a futile attempt to zero on the subject of my pointers. All he could make out was the glowing mountains, but I excitedly recounted in detail what I had just seen. We relayed the experience to one another for perhaps 10 or 15 minutes as we scoured the sky and landscape with our binoculars. We got tired of looking with the binoculars and grabbed another beer to begin settling into camping, when very casually my friend suddenly pointed about in 70 degree ups towards the southerly sky and said, “what the *** is that?” I looked to where he was pointing but I couldn’t see anything. I was looking past it! The moon was full and bright and not a cloud in the sky, a billion stars, and right there about 1000 feet off the ground was an “invisible” moving object. It was very nebulous with no hard visible edges. Within or perhaps attached to it were a random arrangement of lights in varying brightness – virtually indistinguishable from stars in the sky. It was insane we could not make out the actual shape. This nebulous blob of sparkly lights appeared to about 2000 feet off the ground and about 2000 feet away – perhaps the size of a smallish blimp. It was also totally silent. We grabbed our binoculars, if you looked directly at it, it essentially disappeared into the background. You could really only see it if you looked to the side or below or above it, reminding me of how we were told to view Andromeda by looking to the side of it, allowing our peripheral vision to ascertain the galaxy. This was! clearly some form of cloaking technology, but the shape of the cloaked craft was indiscernible.Moving extremely slowly from the northwest to the southeast, at various points it would just stop in the air, hovering silent, and discharge what appeared to be a bunch of flashbulbs going off in random order as if it was trying to blend into the sea of stars behind a full moon night sky. We continued watching this “cloaked” air machine for at least 15 minutes. It moved ever so slowly stopping at least three more times to “impersonate the night sky” light show as it moved over Superstition Hills and stopped again. We noticed at this point there were no more jets; in fact, El Centro’s plane traffic had completely stopped with only this smallish nebulous sparkly cloud in the southeastern sky. We wondered aloud if the Navy had told the airport to hold off takeoffs and landings. We were actually getting bored of watching it through our binoculars when all of a sudden it took off like a streak of light towards the southeast edge of El Centro. It had to have moved at several hundred miles an hour – or faster – from a dead stop and then made a dead stop right at the edge of Highway 78 about a mile southeast of us. All this time is moved so slow, it was stunning how it suddenly moved and stopped so fast.  While we stood there trying to process what this hovering nebulous sparkly blob thing was, it made another light show and suddenly in a blink of an eye it streaked away disappearing into the horizon towards the Yuma proving grounds. We couldn’t make any sense of it but I’ll never forget it. A minute or two later the El Centro air traffic started up again.  I was a skeptic of UFO stories until this happened. Was this aliens? I don’t know but if it was, given the earlier presence of the F18s and their accompanying the ‘mother ship’ as it lifted over the mountains, the U.S. Navy is definitely in cahoots with them.   NOTE: The above image is CGI.