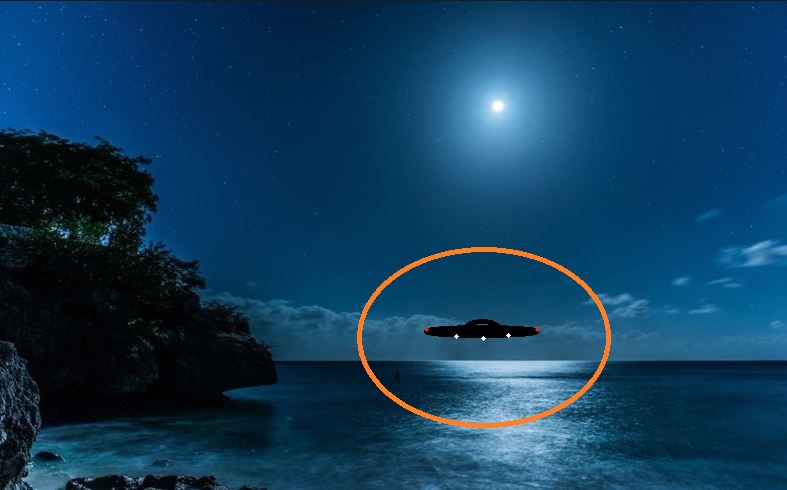 Patrick Thrush was driving in Bradenton, Florida, about 8:50 PM on the 13th when he spotted a UFO over the Braden River. As he pulled his car off the road onto an embankment the high beams from his car showed a silvery reflecting object hover–ing about 20 feet over the water. A tube extended from the object into the water. “I just sat there a second,” said Thrush, then he pulled his camera from the car, ran behind the car and snapped a photograph, using a strobe flash and the car headlights for lighting. As soon as the flash  went off, Thrush said, the tube, which had been at an angle, straightened up and began retracting into the hovering object. When the tube disappeared, the UFO headed toward the embankment where Thrush was standing. He said he heard “several loud clanks” and a splash, suggesting something dropped into the water. The object descended slightly as it came toward him, Thrush said, estimating it was about seven feet above the hood of his car at its lowest point. He heard something hit the car hood, and then the object changed direction and moved rapidly to the west. When he got back to the car, Thrush said the headlights picked out three rocks about one-half inch in diameter. He gave two to Bradenton Police Patrolman Chris Schmidt. The rocks were analyzed as iron pyrite, a substance native to South America. Thrush said that each rock was warm and dry. “The edges were rounded and it had a lava-like appearance to it,” he said. Thrush estimated the UFO was about 25 to 35 feet in diameter and about 11 feet thick. He judged the object to be hover-ing about 35 feet from the shore. (Editor’s note: The June 1974 issue number 79 of Skylook [predecessor to the MUFON UFO Journal] published an interview with Pat-rick Thrush and photographs of both the object and the small rocks.)  NOTE: The above image is CGI.