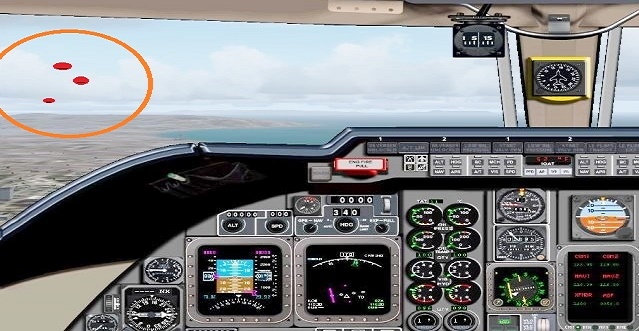 LEAR JETS CLOSE ENCOUNTER WITH AN ALIEN CRAFT
.
JANUARY 13, 1967   ………  FLIGHT NEAR CASA GRAND ARIZONA
.
10 p.m. Pilot Carl M., an FO, and a passenger Jimmie Moran on a Lear Jet 23 en route from Houston, Tex., to Las Vegas, Nev., at 41,000 ft and 300 knots airspeed (Mach 0.82 or about 540 mph TAS) on a 300° heading saw a flashing  red oval luminous object in the 10 o’clock position. Object split into 4 similar red oval objects vertically a number of times, each separated by about 2,000 ft and each emitting a “red ray,” then retracting the lowest objects up into the top object. Albuquerque radar tracked the object 39 miles ahead of the Lear jet moving on the same heading, with no transponder signal and at that moment the object blinked off visually for 30 seconds then blinked on. Albuquerque control contacted a National Airlines DC-8 over Casa Grande, Ariz., whose pilot confirmed the Lear pilot’s reports. Albuquerque control warned the Lear that the object suddenly darted towards the Lear at high speed within seconds until the radar blips merged [possibly 39 miles in 10 seconds or roughly 14,000 mph]. Object flooded the Lear with intense red light so bright the pilot had difficulty seeing his instrument panel, and it maintained position in front of the Lear for a few minutes then, then blinked out then came on again and started falling back behind the left wing, then pulled forward again. (When the object blinked off radar at Albuquerque controllers would lose the object then regain it when it blinked on again (?).) Both UFO and Lear jet made left turns over Winslow, Ariz., then Los Angeles Center radar picked up both targets. Past Flagstaff the object climbed at a 30° angle disappearing to the W in <10 seconds. (Hynek UFO Experience chapter. 7, case RV-1; NARCAP; BB files??)  NOTE: The above image is CGI.
.
KEN PFEIFER WORLD UFO PHOTOS AND NEWS
WWW.WORLDUFOPHOTOSANDNEWS.ORG
WWW.WORLDUFOPHOTOS.ORG
THANKS TO  http://www.nicap.org
.
.

MYSTERIOUS PLANE IN PERSUIT OF A TRIANGLE OVER MONTANA

A triangular shaped object with no navigation/collision lights flew overhead being followed by an obvious airplane.  I stepped outside to take my dog to the bathroom and saw a plane with blinking navigation and collision lights about 30 deg above the horizon, east of Gallatin Gateway. I assumed the plane was coming in to land at BZN. I happened to notice what I thought was a satellite in the same vicinity; at first, I thought it was the ISS as it was big enough.  I kept watching it and dismissed that though as it appeared to be moving much slower than other times when I’ve seen the ISS and wasn’t nearly as bright. In fact, I saw that what I thought was a satellite was really two lights–almost vertical–and, when my hand is held at arm’s length, was about as tall as my thumb and forefinger held about an inch apart.  It was interesting; I hadn’t ever seen something like that before. I stood there watching it and its direction changed, from headed N to headed W. At first, I still thought it was a satellite: it had no blinking lights, so I just thought it was a satellite in orbit and its orbit happened to curve right then. The longer I watched it though, the more I realized that it was being followed by the plane.  Its angle in the sky changed; the lights went from appearing to be vertical in the sky to being parallel with the ground. There were three lights in a triangle shape. It flew right through the constellation Orion, south of Taurus and the Pleiades, and the plane followed behind. At arm’s length, the plane was about a foot behind the object.  The heading of both the object and the plane continued to curve slowly around, from west to SW, and it eventually left the Gallatin Valley with the plane following behind, just off to the side.  It struck me as odd; the object had no blinking lights AT ALL. Normally at night, even at high altitudes, it’s obvious to tell if something is plane or a satellite, primarily from the blinking lights. This object had no blinking lights, no colored lights–other than white, and they weren’t the same intensity as the “chase” plane.  A description of the backgrounds of the observer(s) is useful as well: I have a MS in the quantitative sciences, a BS in Biology, and have been an aviation buff since I was a kid. I don’t drink alcohol or use drugs so could not have been under the influence at all.  NOTE: The above image is a rendering.