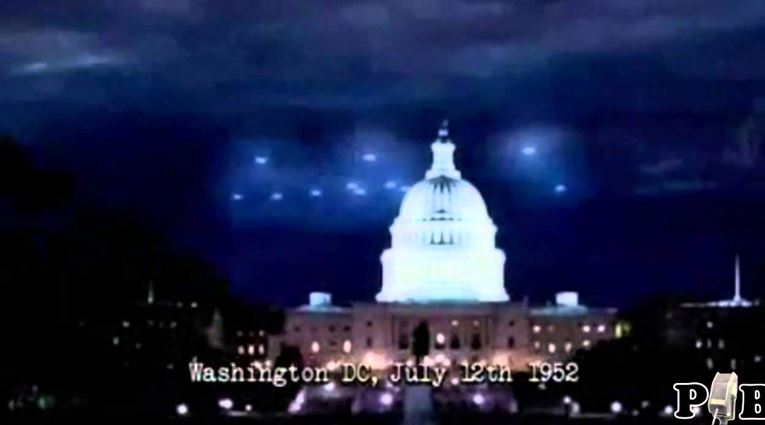 Our family watched 10 or more lights moving, darting, almost like they were playing, racing around the sky. DC was a very quiet small town in the 1950’s and we could often hear jets over at Bolling AFB taking off and landing. There was no sound from the lights themselves, but we did we hear the Bolling jets take off. The AF jets came and all the lights went in different directions. When the jets went passed the lights would come back. This went on for several minutes. Lights first and then Jets appeared and the lights streaked away. Some appeared to just disappear or go out and then turn back on after the jets passed. The lights could turn faster and go in different directions without turning like an aircraft. The jets just could not keep up with them. Finally we watched the lights one by one appear to go up to where we could see the moon was in the sky and they appeared to zip right into the moon and they disappeared. Parents, myself, my brother and a neighborhood boy, Jimmy, all watched the event. I remember that when it was over Jimmy was too frightened to go home and we all walked him to his house. I was five years old and my brother was 9. I just wanted to say that I was there and I witnessed the lights over DC in 1952.

At 11:40 p.m. on Saturday, July 19, 1952, Edward Nugent, an air traffic controller at Washington National Airport (today Ronald Reagan Washington National Airport), spotted seven objects on his radar.[3] The objects were located 15 miles (24 km) south-southwest of the city; no known aircraft were in the area and the objects were not following any established flight paths. Nugent’s superior, Harry Barnes, a senior air-traffic controller at the airport, watched the objects on Nugent’s radarscope. He later wrote:  We knew immediately that a very strange situation existed . . . their movements were completely radical compared to those of ordinary aircraft.[4]  Barnes had two controllers check Nugent’s radar; they found that it was working normally. Barnes then called National Airport’s radar-equipped control tower; the controllers there, Howard Cocklin and Joe Zacko, said that they also had unidentified blips on their radar screen, and that they had seen “a bright light hovering in the sky…[it] took off, zooming away at incredible speed.”[3] Cocklin told Zacko “Did you see that? What the hell was that?”[3]
At this point, other objects appeared in all sectors of the radarscope; when they moved over the White House and the United States Capitol, Barnes called Andrews Air Force Base, located 10 miles from National Airport. Although Andrews reported that they had no unusual objects on their radar, an airman soon called the base’s control tower to report the sighting of a strange object. Airman William Brady, who was in the tower, then saw an “object which appeared to be like an orange ball of fire, trailing a tail . . . [it was] unlike anything I had ever seen before.”[3] As Brady tried to alert the other personnel in the tower, the strange object “took off at an unbelievable speed.”[3] On one of National Airport’s runways, S.C. Pierman, a Capital Airlines pilot, was waiting in the cockpit of his DC-4 for permission to take off. After spotting what he believed to be a meteor, he was told that the control tower’s radar had detected unknown objects closing in on his position. Pierman observed six objects — “white, tailless, fast-moving lights” — over a 14-minute period.[3] Pierman was in radio contact with Barnes during his sighting, and Barnes later related that “each sighting coincided with a pip we could see near his plane. When he reported that the light streaked off at a high speed, it disappeared on our scope.”[5]

At Andrews Air Force Base, meanwhile, the control tower personnel were tracking on radar what some thought to be unknown objects, but others suspected, and in one instance were able to prove, were simply stars and meteors.[6] However, Staff Sgt. Charles Davenport observed an orange-red light to the south; the light “would appear to stand still, then make an abrupt change in direction and altitude . . . this happened several times.”[5] At one point both radar centers at National Airport and the radar at Andrews Air Force Base were tracking an object hovering over a radio beacon. The object vanished in all three radar centers at the same time.[7] At 3 a.m., shortly before two United States Air Force F-94 Starfire jet fighters from New Castle Air Force Base in Delaware arrived over Washington, all of the objects vanished from the radar at National Airport. However, when the jets ran low on fuel and left, the objects returned, which convinced Barnes that “the UFOs were monitoring radio traffic and behaving accordingly.” [5] The objects were last detected by radar at 5:30 a.m.

KENS NOTE:  I also have a witness to alien disc at the end of the runway at new castle airport in Delaware. He was 9 at the time and his father worked at the airport and confirmed it.