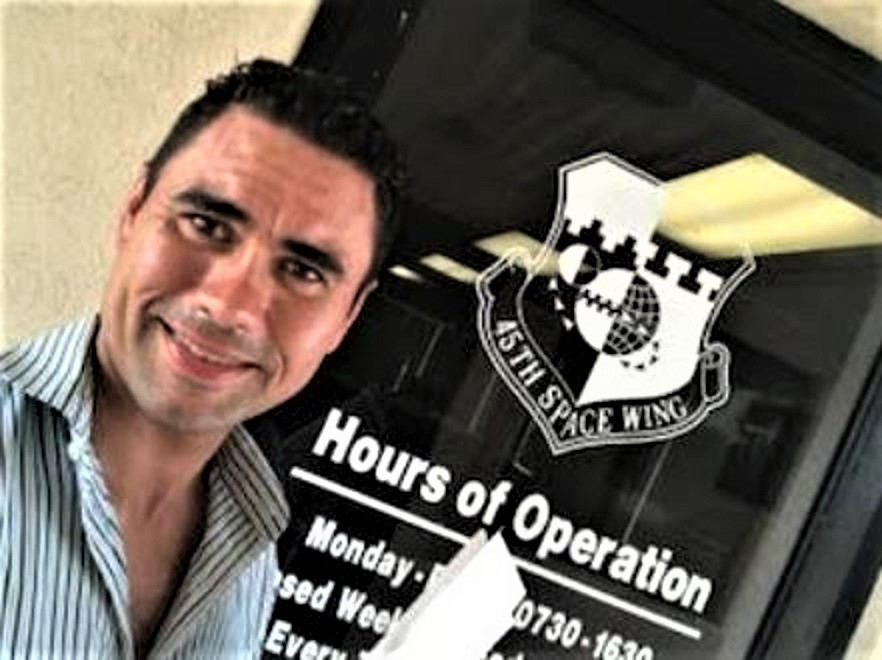 My name is Danny Cruz and this is a record of my account with Flying Saucers. It was July 19th ,2013 approximately 3:00pm in Covina, California. The flying saucer was silently and slowly flying over the homes of the street. I did not see the flying saucer descend from the sky it was already on a slow trajectory moving north. The flying saucer was designed out of blue and silver metallic material with a piece of the ship that stood out to me particularly. The piece of the craft that stood out to me was the blinking white light. The craft has a top down design and at the top is a half dome with a blinking white light. It helped  me determine that the craft was not rotating as I had kept my sight on the craft the whole duration of it while within 20ft above me and as it continued north crossing the street from where I was standing. The flying saucer changed its trajectory soon after it crossed over me. The flying saucer began to ascend and started in a diagonal pathway in an eastward direction. At a certain point in the sky it began its way over the Foothills which is north of me.  I kept my sights on it until it flew over the Foothills and I lost sight of it.  While it was close to me I began sending telepathic messages to the pilot to see if I would get a response. I told them not to leave and that I believed they had something to do with everything about my life. That day was of particular importance to me and the flying saucer was a sign and an answer to my prayers.

July 16th-21st, 2000 at Mammoth Mountain Inn, Mammoth Lakes, California, early afternoon, I teleported in the stairwells in the buildings from the East Wing to the West Wing of the Hotel which share no natural pathways with each other, approximately the same distance as the Flying Saucer was away from me is the distance that I teleported. Both teleportation events took place very close in time. It was silent and without interfering in my footsteps up or down the stairs.

February 3rd, 2013, Orbs over Azusa, California, Super Bowl Sunday around noon. Two silver Orbs appeared together high in the sky over Azusa, California on Super Bowl Sunday while I was at the bus near Foothill and Citrus. I watched the two split off into different directions, while one continued to head eastward the other went on a diagonal South Eastwardly direction and that’s the one I kept my focus on while it headed towards the horizon. It was moving very fast I thought that it would be out of sight over the horizon in less than 10 seconds from when I first had my eyes on it. Just as it was about to cross the horizon and as I was begging to think that I would lose sight of it that it turned back in on the same trajectory 3 times faster than it was travelling just seconds before it began making its way back to where I had been standing. All of a sudden it was over me still high in the sky and the other one or another Orb appeared with it and they began to spin opposite of each other and equal distance apart at with a high velocity keeping the turning fast and tight approximately 6 times in a counter clock-wise direction and then they both disappeared.

Telepathy, its blue and you see it with your mind’s eye, depending on its nature a part of it rests in the back of your brain and the rest of your mind is in a constant flux of the energy as it moves through you, it speaks on its own and the carrier intertwines their own thoughts with the telepathy. It is sometimes more crystalline and does not flow through the mind rather the mind vibrates with the telepathy and the carrier is speaking side by side with telepathy in an audible and observable phenomenon if any witnesses are there to see the person speaking with telepathy. The language is over 1,000,000 words that have the basis structures of the English Language that are recognizable such as assonance, consonance, and alliteration. Telepathy conveys the message of creation to the carrier. The phenomenon associated with the message is manifest on the conscious level to whatever degree he perceives himself to be creator over the universe and have the ability to manifest a creation with the power and meaning of Words.

White Light shined down from the apex of the north western part of the sky from my observation point, it was in Glendora, California, in my backyard, on my trampoline with 3 of my friends spending the night, around 2:00am. The 4 of us were in Junior High School camping in my backyard when a white light beamed down from the sky and stayed over my backyard over my rooftop. The Flying Saucer shares the same accidental information as far as size, shape, proximity, silence, duration of proximity. It leads me to believe that these craft can zoom down from Deep Space or Low Orbital Space with great precision and speed along with the ability to stop in an instant and turn back to where they came from quickly. Our shared testimony to this day is that we all tried covering our eyes from the light, that we were unable to move, the first thing we did for ourselves was to see if any time had passed. We asked ourselves this question and went to the street to check on her car; Nikki was a high school girl hanging out with us Junior High Boys. Nothing changed; we never spoke about it with each other again at school for some reason. It was years later that we had called each other to talk more about it. We have all talked about it and have had a lot of difficulty handling life in general for some reason. We all have very traumatic life stories.

NOTE: The above saucer image is CGI.

KENS NOTE:  Danny Cruz is a close friend of mine and he continues to amaze me every day.  He is an agent for the ” Deep Space Particle Acceleration Corporation ”and his new web site will be published in a few weeks.  Stay tuned…… 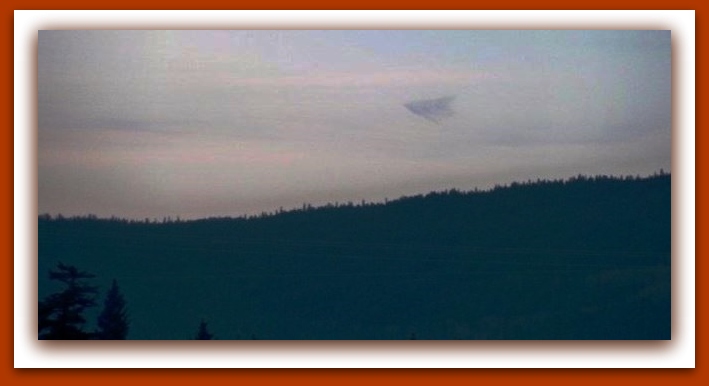 PHOTOGRAPH OF A STRANGE UFO CRAFT OVER CANADA

While driving home from northern BC between Quesnel and Williams Lake on Highway 97 on June 19, 2015 I spotted a craft that I initially thought to be a huge kite and pointed it out to my wife. The highway traveled in a southerly direction and the craft seemed to be paralleling the highway and the Fraser River, the river being approx. 1/2 mile to our west. As we drove along, the object was traveling nearly at our speed of 60 mph and seemed to be across the river another mile or more. We had a very good view of the object and there was a trailing apparatus below the craft and it appeared to be of a very heavy chain or cable with a little larger object at its trailing end. That is what made me first think of a kite, but it wasn’t stationary. The trailing cable was at about a 35 degree angle from the bottom of the craft.  At a convenient pullout with a clear view of the craft I pulled over and took out my binoculars for a quick look and my camera, a Kodak Easy Share Z950 and zoomed in on the object for a photo, but it wouldn’t seem to focus clearly on it, kept going in and out of focus. It seemed to be somewhat transparent through the viewfinder and with the binoculars, but was clearer with the naked eye.  The trailing tail looked to be at least two hundred feet or more in length and I now suspected the object at its end was an apparatus that may have been collecting data, for I was now positive it was not a Canadian aircraft of any sort I have seen.I am a professional land surveyor with over 45 years of experience, and observations are most relevant to that occupation.

The photo 1 has some nearby pine trees above the craft, a triangular shape with a definite protrusion at the top and bottom of its rear end and a long, elongated additional wing, if I may, at the bottom of the craft from near the front tapering toward the rear.  There was a bit of a haze look across the valley, but when I first saw the object it appeared much clearer than the photo and was below the main cloud cover. One lower cloud can be seen somewhat, in front of the object. I got back in the car and traveled on southward and thought if I sped up some I could get a little closer and get another photo. But as I sped up, so did the object and the long heavy trailing cable was now at a 50 degree angle, proving it had speeded up also. I stopped and got the photo 2 at a further distance away, but it doesn’t show a great deal other than its semi transparency.  That tree line on the horizon appeared to me to be two to three miles away and the object appeared to be even further. The tallest trees on that horizon are probably not over 100 ft. in height, which gives the impression that this craft is very large.  I kept up my speed as some lower mountains I would enter would obstruct the view and hoped to see the object again as I neared the top of the hill trending down into Williams Lake, but the craft was never seen again.