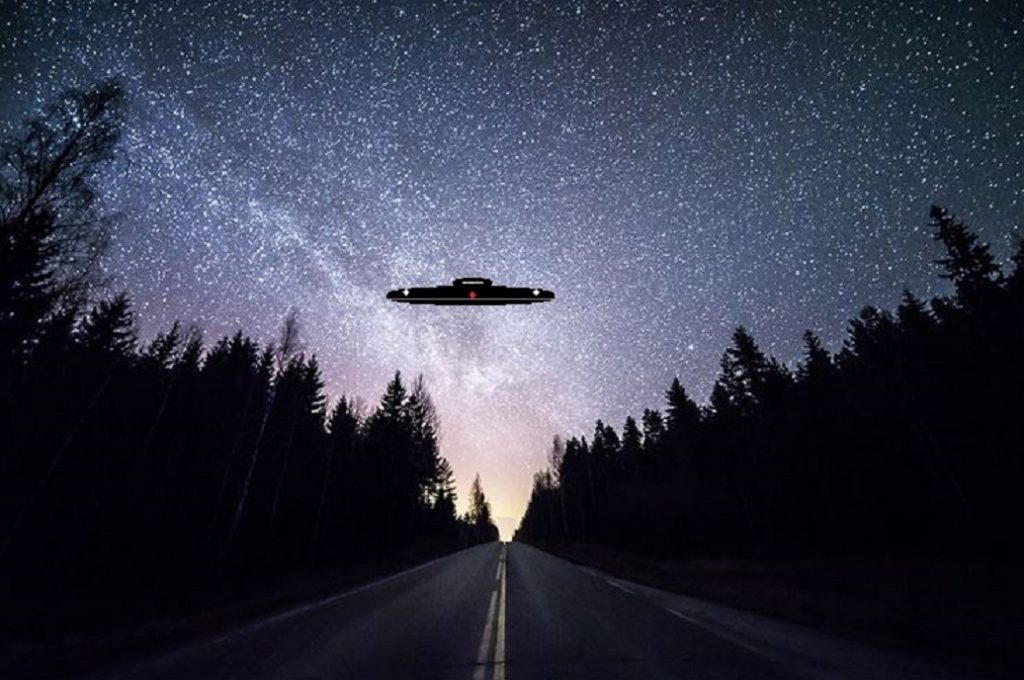 Keene, N. H. police got an anonymous phone call. The man refused to give his name because he said his wife would think he was crazy. He told the police something strange was hovering over the city.  A skeptic familiar with crank calls, Sgt. John Zeller was in no hurry to reach the section of Route 12 where the object was reported.  As he drove from West Street to Route 12, the car coming toward him screeched to a stop, and two people got out, pointing at the sky.  “There was something, mostly lights, hovering five to 700 feet off the ground, red, green, white pulsating types,” Zeller says. “All you could see was the lights, you couldn’t see any outline. The strange  thing was, this was absolutely still, like it was stuck there. There was no sound. I stood there probably two minutes.”  Then Sgt. Zeller aimed his 200,000 candlelight power spotlight at the hovering lights.  “You could see the light beam through the dark,” Zeller says. “The minute the light beam was put on it, it came toward it, at an angle, lowering at the same time. It was so clearly unconventional. The thing kept coming about 100 feet from the cruiser, traveling as fast as you’d ride a bicycle.”
The strange craft hovered over the cruiser, barely moving. Zeller saw no markings, no openings, and can’t remember if he saw wings, but he described the object as 40-50 feet long, 10-15 feet wide, cream-colored with blunt ends, ridged on the bottom like an old-fashioned bathtub.  “It gave out a two-tone hum,” Zeller says. “It went over to a car wash and it did something which I assume was turning around, then it went  boom  over toward the Ramada Inn.”  Zeller admits he’d never seen anything like the thing that hovered over his cruiser the night of Oct. 15, 1984.  NOTE: The above image is CGI.
KEN PFEIFFER WORLD UFO PHOTOS AND NEWS
HTTP://WWW.WORLDUFOPHOTOS.ORG
HTTP://WWW.WORLDUFOPHOTOSANDNEWS.ORG
HTTP://WWW.KENPFEIFERDISCOVERIES.COM
THANKS TO HTTP://WWW.UFOSIGHTINGS DAILY.COM