“Three radar units tracked a falling UFO. Secretary of State George C. Marshall requested a search party be dispatched from Camp Hale in Colorado. A helicopter team found a crashed 30-foot disc 12 miles northeast of Aztec, New Mexico and recovered 2-12 badly burned humanoids. The disc is stored in Hangar 18 at Wright-Patterson AFB near Dayton, Ohio.” This report was confirmed by ex-CIA agent Virgil Armstrong as authentic. Interviews with Armstrong on the subject can be found in several UFO documentaries. Much of the information about this case is sketchy, at best, including the precise date, though all sources seem to agree on 1948. Armstrong is well known for his statements that US intelligence had determined that Hitler possessed flying saucer technology as well as working saucers for warfare, some equipped with laser weaponry. Had the war continued, allied forces might have encountered these advanced weapons systems and probably met defeat by the Nazis. It remains uncertain just how much saucer technology was gleaned from the ‘brain drain’ of Nazi scientists by the US during and after the war. NOTE: The above image is CGI.

On August 16, 1945, 20 mile southeast of San Antonio, New Mexico, Reme Baca and Jose Padilla literally stumbled across the remains of what they believe to have been an alien spacecraft. Their personal account of the case displays many of the key ingredients of crashed UFO lore:

In August of 1945 Jose Padilla and Reme Baca said they were sent out on horseback from the Padilla Ranch in San Antonio, New Mexico tasked to check on Jose’s father’s herd of new cows.

What they were sent to do and what they claimed to have experienced was nothing short of what actually occurred to them that frightening afternoon.

With their horses tethered as they hid behind a rock in the distant reaches of the New Mexico desert – Jose 9 and Reme 7 years of age at the time – were awe-struck by the sound of thunder and the grinding thud of something strange that came to earth on the Padilla Ranch in San Antonio, New Mexico.

With trepidation tendered by child-like watchfulness they approached the crash site to within 200 yards to witness a craft stuck in rock and sand; its charred 30 foot hull shrouded in dust and burned ash had skidded to rest at the end of a wide plough-like furrow the length of a football field.

Using binoculars they saw strewn wreckage, strange creatures and military activity that would haunt them for days to come and – for the rest of their lives.

All of this occurring two full years before the archetype of all UFO crashes on the Foster Ranch outside the small town of Corona, New Mexico a mere 67 miles from Roswell.

These astonishing claims, made by Jose Padilla and Reme Baca, have been researched and recorded by Denver author/researcher Paola Harris who – in conversation with Zland Communications – detailed how these two young Hispanic children: saw at least three creatures in the unusual oval shaped craft, had, some days later, climbed into the craft itself to retrieve pieces of the wreckage after guards had vacated the area and, how they were told by State Police to be quiet about what they had seen. – exopoliticsinstitute.org NOTE: The above image is the witness rendering. 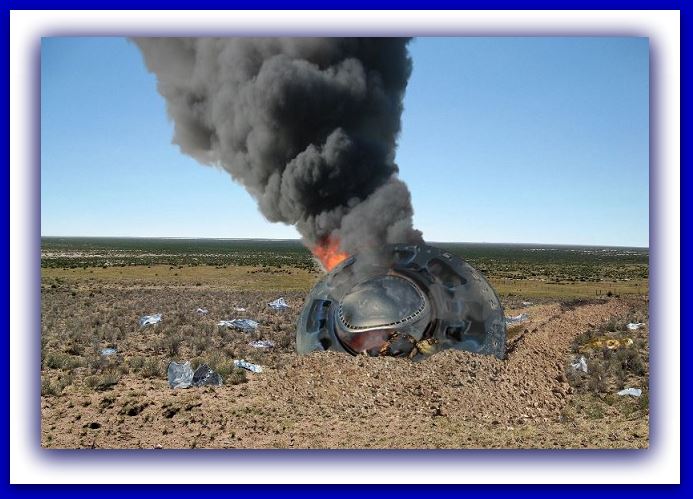 CRASHED ALIEN CRAFT NEAR THE RIO GRAND RIVER
.
1955  ……….  DEL RIO TEXAS
.
This is a shocking eyewitness testimony from a retired U.S. Air Force colonel and former fighter jet pilot who says that he chased a UFO across West Texas and watched it crash along the Rio Grande River near Del Rio, Texas.  Robert Willingham was flying an F-86 fighter jet across West Texas when he saw an object “as bright as a star” streak past him and then execute a 90-degree turn going 2,000 miles per hour.  Giving chase in his jet, the decorated World War II and Korean War veteran watched in awe as the object suddenly plummeted to Earth near Del Rio, Texas. Soon after, he visited the crash site and saw a large, silver UFO, “sticking into the side of a hill.”Nothing could have prepared him for what happened next, as his life was about to change forever.
.

“Rarely do you have such a highly credible eyewitness to an event of this magnitude come forward with information that is guarded so closely by various intelligence agencies.”Willingham, who lives near Wichita Falls, was one of America’s earliest jet aviators, during the time when the military was transitioning away from propeller-driven planes. It was also a time when UFO sightings had become commonplace throughout the United States, especially in and around top-secret military bases.   “He was flying as part of a group of F-86 fighter jets that were escorting a B-47 bomber across West Texas,” said Noe Torres, a lecturer, researcher, and member of the MUFON chapter in Texas. “It was a Cold War simulation designed to follow the route that bombers would take to reach Russia in the event of a nuclear war.”

A radio message warned Willingham and the others about a fast-moving UFO that was approaching Texas from the northwestern U.S. “Suddenly it came into their view, looking like an intensely bright light – like a bright star seen through a telescope,” Torres said.  “It blazed across the sky past them, and everyone in all the planes saw it. But, because of the location of Willingham’s jet, he was in the best position to see what happened after the object flew by.”  Willingham estimated that the object was traveling at 2,000 miles per hour, and he saw it make a sudden 90-degree turn, without slowing down. As the UFO streaked toward the Texas-Mexico border, Willingham received permission to break from the formation and pursue the object in his F-86 fighter. Following the object’s vapor trail, Willingham followed it down to near Del Rio, Texas, where he saw it suddenly begin to wobble and descend rapidly.  As the pilot watched in stunned silence, the UFO plunged toward the Rio Grande River, plowing into the ground just south of Langtry, Texas and digging out a 300-yard long furrow before finally coming to rest alongside a sandy hill.  Uriarte said, “Willingham had heard a lot of discussion about UFOs, and now suddenly, he had one down on the ground. As he flew over the awesome scene, he decided that he was going to switch planes and return there as quickly as possibly to look at the thing up close.”  The aviator returned to the scene of the crash a few hours later, according to Uriarte.  “They landed the small plane right alongside the crashed UFO and noticed that a large number of Mexican soldiers had already taken control of the crash site.

They had cordoned off the area and would not allow Willingham or Perkins to approach the main part of the wreckage.  However, what they were able to see and look at was so amazing that it forever changed their lives.”  Before being forced to leave the area by the Mexican military, Willingham picked up a chunk of strange metal debris that was about the size of a man’s hand. He later tried to burn it, cut it, and otherwise deform it, but he was not able to. “It was a piece of something not of this world,” Uriarte said.  Torres and Uriarte are active members of the UFO research community with many years of experience investigating UFO cases in the Southwestern U.S. and Northern Mexico. Their research has appeared on the History Channel’s UFO Hunters and UFO Files TV shows. Their first book, Mexico’s Roswell: The Chihuahua UFO Crash, published in 2007, received wide critical acclaim and was the basis for a February 2008 episode of UFO Hunters, in which the authors appeared. The authors have appeared frequently on UFO-related TV and radio shows and have spoken at many conferences and events.  NOTE: The above image is a rendering.